The talented strategist of Giga. He has been looking into ancient literature and legends. He suspects that turbulent times will come with the appearance of the person who holds the Ryuuteiken. As a general, his abilities could be on par with Sousou and his dubious personal actions make Sousou keep a close eye on him. He is behind the strategy in the Kurou Fortress battle.

According to the dates in the real Chinese literature, Sima Yi is actually 12 years old during the Battle of Hulao Pass which is the battle which the Battle of Kurou Fortress is based on. In the Red Cliff battle, together with Houtou and Kakuka betrayed Sousou in order to realize the final chapter of the G Chronicles "Apocalypse". They fire the Shinkahihou to the sky aimming to engulf Mirisha in a sea of flames. After realizing "Apocalypse", they left for the Red Cliff.

He uses the Crimson Fan (aka Kouyokusen (紅翼扇)) and the Shirogane no Kiba (銀の牙) as his weapon. The Crimson Fan is mainly used when he is in strategist mode. The two weapons combine into a bigger sword named Gayoku no Taiken (牙翼の大剣). 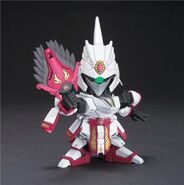 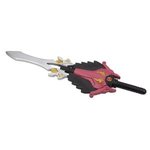 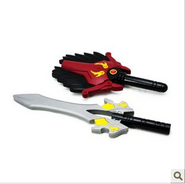 The Crimson Fan (a.k.a Kouyokusen (紅翼扇)) and the Shirogane no Kiba (銀の牙).
Add a photo to this gallery
Retrieved from "https://gundam.fandom.com/wiki/Shiba-i_Sazabi?oldid=386246"
Community content is available under CC-BY-SA unless otherwise noted.