Sherilyn Hyde (シェリリン・ハイド, Shieririn Haido?) is a character in the side stories of Mobile Suit Gundam 00. A MS mechanic and a disciple of Ian Vashti, she has a history of working for Celestial Being and Fereshte.

Though young, her skills as a mechanic is excellent. It seems as though she has no feelings and seldom speaks but she does has another side to her. She's good friends with Hanayo and is frequently seen with Hanayo. Although quiet, she keeps her childishness hidden inside. Sherilyn has a fundamental trust of people. Her attire appears girly because she doesn't think of herself as simply a mechanic.

As a disciple of Ian Vashti, she was trained in the repair, maintenance, upgrade and development of the Gundams. The first Gundam she was involved in developing was the GNY-0042-874 Gundam Artemie. She played a critical role in developing a Twin Drive System usable by GN Condensers, which was used in the development of the GN-0000RE+GNR-010 00 Raiser GN Condenser Type.

When Celestial Being began their armed interventions in AD 2307, Sherilyn was serving as the primary mechanic and engineer of the Fereshte. In AD 2311, Fereshte was disbanded when its members rejoined the Celestial Being, where Sherilyn helped with the development of the fourth generation Gundams.

As a member of Celestial Being, she was involved in the development of power-up equipment for the fourth generation Gundams. Notably, she was one who came up with the idea for the GNR-101A GN Archer. She also supported Hanayo in producing the GN Hammer for Fon Spaak's GNY-001F Gundam Astraea Type F, and created a GN Condenser powered version of the GN-XXX Gundam Rasiel from the wreckage of the GN-XXXB Gundam Rasiel Black for Hixar Fermi's use.

Despite a GN Condenser being unable to produce GN Particles, Sherilyn believes that its capabilities should be able to match up to those of a GN Drive. To that end, she worked on developing a Twin Drive System usable by GN Condensers. She incorporated the results of her research on this topic into the GN-000GNHW/7SGD2 00 Gundam Seven Sword/G Inspection, and tested the Gundam against Cherudim, Arios, and Seravee in a computer simulation. The Gundam Seven Sword/G Inspection has a red color scheme as that is her favorite color.

Main articles: Celestial Being and Fereshte 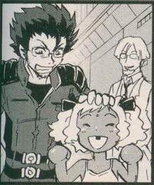 Ian, Sherilyn and Moreno (00I, flashback to her past) 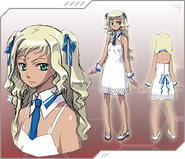 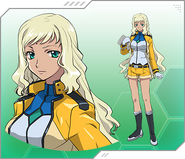 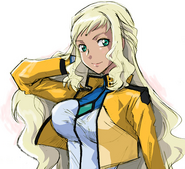 In Gundam 00I
Add a photo to this gallery

Sherilyn with Chall Acustica
Add a photo to this gallery

Retrieved from "https://gundam.fandom.com/wiki/Sherilyn_Hyde?oldid=451963"
Community content is available under CC-BY-SA unless otherwise noted.