Shani Andras (シャニ・アンドラス) is a character that appears in the TV anime Mobile Suit Gundam SEED.

Shani is one of the three "Boosted Men" ('First Generation' Biological CPU) assigned to operate one of the Earth Alliance's new Gundam mobile suits, the GAT-X252 Forbidden Gundam. As with his comrades, his personal data has been erased from the military's records, although it stands to reason that he was raised and "reprogrammed" in the same facility as the other Biological CPUs.

While piloting Forbidden, the antisocial Shani prefers to fight alone without his teammates interfering, and between missions he puts on his headphones and blocks out the outside world by listening to music. Furthermore, he has a laid-back attitude most of the time.

Shani is a very skilled pilot, although his impulsiveness and anger holds him back in certain situations. On numerous occasions, he showed skills equal to those of Athrun Zala and Kira Yamato.

At the battle of Orb, Shani, Clotho Buer (piloting GAT-X370 Raider Gundam), and Orga Sabnak (piloting GAT-X131 Calamity Gundam) were decimating Orb's forces. He then attacks and destroys a battleship. When Kira Yamato, piloting the ZGMF-X10A Freedom Gundam, arrives, he and his comrades attack and overwhelm Kira. They almost win, until Athrun Zala (piloting the ZGMF-X09A Justice Gundam) intervenes. Unfortunately, Shani and his fellows began suffering the withdrawal symptoms from the drug that made them Biological CPUs, forcing them to withdraw from the battle to regain the necessary drug to subdue the withdrawal. On the next day, they attacked Orb until Kira arrives, then Athrun comes and balances the battle. That same day they all chase the Kusanagi, until the Freedom and Justice Gundam blow them away.

Shani and the others were soon transferred into space aboard the Archangel-class Dominion, to chase the Archangel and Kusanagi, mainly to capture the Freedom and Justice. They tracked their quarry to the Mendel colony. The three Biological CPUs sortied against the newly formed Three Ships Alliance. Shani/Forbidden attempted to take out the Kusanagi, which was snared on a tether, only to be knocked out of the way by Athrun/Justice. Shani was then forced to retreat as the Kusanagi and Eternal arrived to back up the Archangel. As the Three Ship Alliance withdrew inside the colony, the Biological CPUs once again sortied, only to be single-handedly fended off by Athrun/Justice. They soon changed objectives after the ZAFT ships deployed a lifepod, containing Flay Allster, who stated over the comms that she has a key that could end the war. Once they brought the lifepod aboard the Dominion, Muruta Azrael got info on the Freedom and Justice Gundam's N-Jammer Cancellers.

Battle of Jachin Due

Azrael convinced the top brass of the Earth Alliance to use the N-Jammer Canceller technology to launch a nuclear attack on the PLANTs. The Biological CPUs "babysit" the Peacemaker forces, ensuring that no ZAFT forces intercepted them. Shani, in particular, "want[ed] to see all the pretty lights". However, the Freedom and Justice intervened, destroying all the missiles.

Shani was killed by Yzak Joule and the GAT-X102 Duel Gundam after Dearka Elsman damaged the Forbidden`s beam deflectors, then Yzak went in for a kill, prompting Shani to fire the "Hresvelg" plasma induction cannon at him. Yzak blocked this attack with his shield and surprised Shani by rushing out of the remains of the Assault Shroud, following this was a strike with his beam saber right through Forbidden's cockpit, killing Shani instantly. 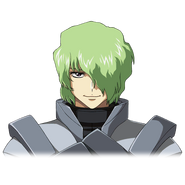 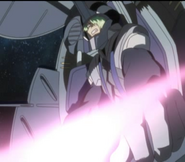