Shams wears large rectangular glasses, but they are just for show - his eyesight is excellent without them. He dislikes Coordinators as he views them as inhuman beings, but he is also a cheerful young man who likes to play billiards. However, his calm demeanor is replaced with blind rage after witnessing Mudie Holcroft die in combat. Her death seemed to effect him to a great degree (as his screams upon finding her mangled corpse in her cockpit would seem to imply). This leads him to ignore and abuse his energy supply in the following mission, which results in his own demise.

He is an all-round fighter, and excels in both close combat as well as long range.

A mobile suit pilot belonging to the 81st Independent Mobile Group of the Allied Forces. He has been indoctrinated in the anti-Coordinator ideology at an orphanage. After Mudie's death, his hatred for Coordinators grew even stronger, and during the mission to attack the D.S.S.D space station, he was so angry that he did not listen to the battery alerts of the Verde Buster or the warnings of the operators, and just destroyed everything around him. The Verde Buster phase-shifted down and stopped operating, and he died in battle under the concentrated fire of the Civilian Astray DSSD Custom units from all directions. Just before his death, he had a sarcastic smile on his face. 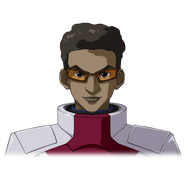