Shagia Frost(シャギア・フロスト ) alongside his brother Olba Frost are the main antagonists from the After War Gundam X anime.

Shagia Frost, and his younger brother Olba, were potential Newtype candidates for the UNE (United Nations Earth) armed forces, under the care of the UNE's Newtype research labs. However, despite a high level of empathy with one another (In one scene, Shagia takes a hit for Olba, and Olba is clearly able to feel Shagia's pain, saying, "Don't say anything, brother. I can feel your heart.") and telepathy with one another, their abilities were not compatible with the Newtype-use Flash System. They were thus dubbed "Category F", the "F" standing for "Fake" and rejected.

Despite their lack of Newtype skills to use the Flash System, they are extremely ruthless and cunning compared to everybody else. Not above using treachery to achieve their goals they have killed not only their worst enemies but also fellow allies in their personal goals. They would eventually be recruited by the New United Nations Earth forces. Their true goal is the elimination of every known Newtype in existence by setting off another eternal war as the 7th Space War was responsible for the countless deaths of Newtypes during the struggle. 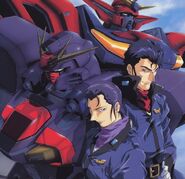 Retrieved from "https://gundam.fandom.com/wiki/Shagia_Frost?oldid=375887"
Community content is available under CC-BY-SA unless otherwise noted.