The Gundam Wiki
Register
Don't have an account?
Sign In
Advertisement
in: Characters, Unnamed Characters, Universal Century characters,
and 2 more

Sergi (セルジ) is a fictional character that appears in Mobile Suit Gundam Unicorn.

A subordinate of Angelo Sauper who belongs to the Full Frontal's Royal Guard. He joins Frontal's unit with Angelo, Cuarón, and others during the first attack on the Nahel Argama. He is assigned to guard the rear, but is shot down by a stray shot from the Unicorn Gundam's beam magnum and dies in battle. 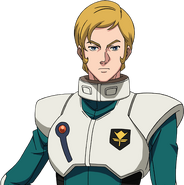