A self-propelled gun used by the Earth Alliance and Orb Union. It is mainly deployed to intercept mobile suit-carrying capsules dropped from ZAFT's Descent Capsule Carriers and Laurasia-class ships. In addition, if the firing data link antenna at the rear of the vehicle can be perfectly coordinated with radar vehicles on the ground, satellites in space, or long-range patrol aircraft, it can recover to a level where it can shoot down incoming missiles even in an N-Jammer environment. It has a relatively flexible elevation angle but no left or right swing angle, so it is usually operated in asphalt areas to allow the 8-wheeled vehicle to turn quickly.

Several Howitzers were used during the Battle of Heliopolis, where they were destroyed by three ZGMF-1017 GINNs in trying to prevent the capture of the of the G Project Gundams.[1]

Three Linear Howitzers with a Bulldog at JOSH-A (The Descending Sword, HD Remastered) 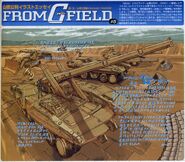 From the G-Field
Community content is available under CC-BY-SA unless otherwise noted.
Advertisement