Selene McGriff (セレーネ・マクグリフ, Serēne Makugurifu)  is a fictional character and one of the main protagonists from the Mobile Suit Gundam SEED C.E. 73: STARGAZER ONA.

Selene can be egotistical sometimes but concentrates very hard on achieving her goals. She has a friendly personality and admired for her intelligence as well as her beauty.

Selene is skilled in several sciences, including mechanical engineering, electrical engineering, computer programming, and advanced physics. With her knowledge, she can design highly advanced and powerful mobile suits of her era.

Selene is a Coordinator who works as an engineer on the Deep Space Survey and Development Organization's GSX-401FW Stargazer Project. Her parents are also members of DSSD and like many other members of the organization, she was born and raised in space.

On her way to a DSSD's launch site, Selene and one of her male colleagues were caught in a ZAFT attack. Her companion decided to stay behind and fight the terrorist, while sending Selena onto a boat to travel to their destination. Finally, Selena got to DSSD's space station on a shuttle.

After the failed assault on the DSSD space station, Selene is sent to somewhere between Earth and Venus, along with Sven, in the Stargazer. To conserve energy because the Stargazer's oxygen supply was estimated at 27 days, Selene places them both in a hibernation state. They are located 27 days and 21 hours later by Sol, alive. 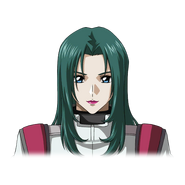 Retrieved from "https://gundam.fandom.com/wiki/Selene_McGriff?oldid=431065"
Community content is available under CC-BY-SA unless otherwise noted.