The Second V is a mobile suit featured in the Mobile Suit Victory Gundam novel and is piloted by Uso Ewin.

Developed from the LM312V04 Victory Gundam, the Second V was created by the League Militaire in their lunar technetium factory. Data from numerous battles with the Zanscare Empire was used in the suit's development process, and it also inherited the basic structure and systems of the Victory Gundam, like the separation and combination ability. However, the Second V has higher defensive capabilities due to the Minovsky Shield and upgraded armor parts. Additionally, its long range offensive power is improved with the addition of the Mega Beam Cannon, making it as powerful as mobile armors and specialized heavy mobile suits. Both new weapons are mounted on the weapon platforms on the sides of the Second V. These platforms can also mount the same weapons or other equipment.

Although the improvements granted the Second V immense capabilities, it can also put a higher burden on the suit's generator and decreases mobility due to the added weight. Fortunately, all these concerns were solved by the development and installation of the Minovsky Drive Unit, a new propulsion system capable of thrust more powerful than existing systems such as nuclear fusion thrusters or even the Minovsky Craft System. Furthermore, the system only has a small burden on the generator, enabling surplus energy output to be diverted to other equipment. However, the Second V has the risk of breaking down when operating at maximum thrust output and has poor balance, leading to an aversion to its use in combat. Despite this, it is still a symbolic mobile suit of the League Militaire and a precursor for mobile suits of a new era.

Mounted in the head, the pair of Vulcan Guns are shell firing weapons with a high rate of fire but little power. While ineffective at damaging the armor of a MS, they can damage lightly armored areas such as the sensors, for intercepting missiles, enemy aircraft and other light-armored targets, or to deter enemy MS from closing in.

The beam sabers are powerful melee weapons that emit a blade of plasma contained by an I-field. The Second V stores two beam sabers in storage racks located in each forearms, for a total of four beam sabers.

A standard hand carried ranged beam weapon, it fires concentrated mega particles that can damage any ordinary armor not specially treated to resist it.

Mounted below the barrel of the beam rifle, it can load and fire a variety of physical projectile.

One of the suit's defensive armament, a pair of beam shields are stored in the forearms. The beam shield generates a plane of energy similar to the blade of a beam saber, but uses it for blocking both beam and projectile weapons.

A shield with defensive capabilities that rival the beam shields used by warships, it is folded in half and stored on the left weapon platform when not in use. The Minovsky Shield unfolds during use; at maximum output, its three shield bits are released in different directions and work in unison with the main shield unit to form a large beam membrane to protect a wide area. Due to its large energy consumption, it cannot be used by other mobile suits and can be said to be a dedicated armament for the Second V.

The Core Block System facilitates the seperation of the MS into modules. The Second V's central block, which houses the MS's cockpit, control systems and main power source, can eject in case of emergency and unfold into a small Core Fighter.

An attachment point for weapons, shields, spare ammunition, or optional mission-specific equipment. Hardpoints can also be used to store carried weapons when a mobile suit needs its manipulators free for other purposes. Several hardpoints are mounted on the Second V's body.

A new propulsion system and the most prominent feature of the Second V, it generates a force field and gains propulsion from the resulting repulsive force. It has a disadvantage where massive amounts of mega particles are emitted when creating the force field, but the propulsion generated by the system exceeded conventional systems. The system also places less strain on the mobile suit's generators, allowing the use of equipment such as the mega beam cannon and the minovsky shield.

Appearing in the novelization of Mobile Suit Victory Gundam, it is used by Uso Ewin as his second mobile suit, replacing the LM314V21 Victory 2 Gundam's role in the anime.

In other materials it is stated the Second V was envisioned as an upgrade plan for the Victory Gundam. However, its performance did not meet expecations, and thus the League Militaire opted for the Victory 2 Gundam instead.[1] 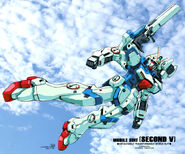 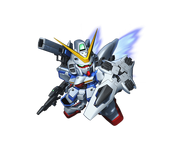