Sean Mitadera(ショーン・ミタデラ)is a fictional character from the manga Mobile Suit Gundam Thunderbolt. He is a mobile suit pilot of the Living Dead Division.

Sean Mitadera was a soldier for the Principality of Zeon who at some point in his career lost both of his arms in combat. After his injuries he was transferred to the Living Dead Division in the thunderbolt sector of the Side 4 colony ruins ruins, and is fitted with prosthesis which allowed him to fight again. He was promoted to the rank of Chief Petty Officer (Master Sergeant) upon joining the Living Dead Division. He piloted a Ms-06 Zaku II (Thunderbolt Ver.) that uses a Big Gun‎ sniper turret. He became friends with fellow pilots Daryl Lorenz, Fisher Ness, Layton, and Hoover . He engaged federation pilot Io Fleming twice, but the second time round, his Big Gun was shot and destroyed along with his Zaku's legs by the FA-78 Full Armor Gundam. He was then used as a human shield and finally a decoy when Io used a booster to launch him at Daryl and then he was hit by a missile.

It is revealed that he survived in an escape pod during the encounter with the Full Armor Gundam. By U.C. 0080, Sean had moved to Earth and worked as the bodyguard of the "Sand Rat" junk shop based in Africa. 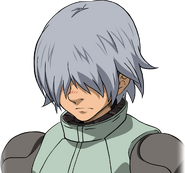 Add a photo to this gallery
Retrieved from "https://gundam.fandom.com/wiki/Sean_Mitadera?oldid=419509"
Community content is available under CC-BY-SA unless otherwise noted.