Seabook Arno (シーブック・アノー, Shībukku Anō?) is the main protagonist in the film Mobile Suit Gundam F91. He also reappears as one of the main support characters in the manga sequel Mobile Suit Crossbone Gundam under the name Kincade Nau (キンケドゥ・ナウ, Kinkedō Nau?).

Originally, Seabook is an engineering student and thus is well acquainted with the inner workings of many machines and even had the skill to work on mobile suits, despite seeming to have a distaste for them. His piloting abilities are shown when he swiftly and almost unconsciously destroys three enemy mobile suits in the first few minutes of his first engagement, though it is unknown whether this is due to his Newtype abilities, the Bio-Computer aboard the F91, his own natural skill, or any combination of the three.

An engineering student at the Frontier IV space colony, who flees with his sister and friends when the colony is attacked by the Crossbone Vanguard. At the nearby Frontier I colony, Seabook and company find refuge aboard the Earth Federation Forces training ship Space Ark. Seabook is forced to defend the ship by piloting the prototype F91 Gundam F91, and his natural talent as a mobile suit pilot leads the crew to speculate that the young man is one of the Newtypes of legend. Appropriately, the F91's advanced bio-computer is designed by Seabook's mother Monica, whom he bitterly resents for abandoning their family to concentrate on her research work. Like many of his counterparts in earlier Gundam series, harsh and desperate circumstances eventually force the reluctant Seabook into the cockpit of a mobile suit - a mobile suit christened "Gundam F91". Naturally gifted with the ability to pilot, Seabook easily manages to defeat numerous mobile suits by himself. His amazing abilities are later reinforced by the emergence of his Newtype powers, thereby escalating his growing fame as an ace pilot. Seabook utilizes his skills along with the Gundam F91 to protect his friends, defeats Carosso and bring an end to the conflict.

Ten years after the events of Gundam F91, Seabook (now under the alias Kincade Nau) and his beloved Cecily Fairchild have gone underground to revive the Crossbone Vanguard after its collapse due to economic pressure from the Federation. The two have reformed the Vanguard as a resistance movement against the shadowy Jupiter Empire, led by Crux Dogatie. Kincade then becomes a mentor for young pilot Tobia Arronax as Kincade pilots the XM-X1 Crossbone Gundam X-1. He also forms an uneasy alliance with Zabine Chareux, and fights the Jupiter Empire with hopes to stop their invasion of Earth.

During a sudden attack by the Jupiter Empire and the Earth Federation, Seabook encounters the defected Zabine once again, and the two begin to duel. After Zabine smashes his beam saber through the X-1's cockpit, Seabook plummets to Earth, where he was later rescued by the SNRI. As a result of his injuries, Seabook has his right arm replaced with a mechanical prosthetic (and is later revealed to have a large scar over his right eye), and is still recovering while he continues to fight alongside Tobia and the rest of the vanguard, before leading them in to space to prevent the Empire's attempt to start a nuclear holocaust on Earth. In the final battle against the Jupiter Empire, Seabook and Zabine fight yet again, with Seabook managing to impale the X2's cockpit (and Zabine) with the X1's Heat Dagger, thus destroying the X-2 and it's pilot once and for all. After the conflict, he retires to a peaceful life on Earth and marries Cecily, running a bakery with her. He passes on the mantle of the Crossbone, as well as the X-1 itself to Tobia, who then starts out on his own along with Bernadette.

In Skull Heart, it is shown in photographs that Seabook and Cecily reside happily on Earth where they have opened a bakery and have become parents to an unnamed child.

Seabook's life during the events of Steel 7 is narrated by a civilian woman whom Tobia Arronax comes across when he intends to recruit Seabook to join the Steel 7 Team to head to Jupiter to stop the revived Jupiter Empire under the Callisto's brothers from using the colony laser Divine Punishment to attack Earth. The woman tells Tobia that Seabook and Cecily have just celebrated the birth of their second child. Upon hearing this news, Tobia decides not to meet with Seabook, because of the huge possibility that he would not return to his new family alive.

Twenty years after the event of Crossbone Gundam, Seabook has continued to run his bakery while living peacefully with Cecily.  Their peaceful life is disrupted by the invasion of the Zanscare Empire, and him and his townfolks have to take refuge at a sports dome nearby his town.  When Font Baud attempts to elope with Belle aboard the XM-X0 Crossbone Gundam X-0 after suffering PTSD, they encounter Seabook in a town set in the X-0's navigation system by Curtis Ruthko.  He reveals Curtis's true identity to Font. Realizing that Belle is the daughter of Curtis and Tetenith Dogatie, Seabook takes her in as an apprentice in bakery, and discerns that Belle wants to learn how to bake bread to cheer Font up.  He puts this through Font to help him regain his resolve in helping Serpiente Tacon​​​​​ to continue fighting Kizo and his Golden Eggs Squad of the Zanscare Empire over the space virus Angel Call.  The remnants of Zanscare Empire attacks Seabook's town again, hoping to capture some civilian hostages to extort the League Miltaire into providing them space shuttles to escape earth.  Seabook borrowed the X-0 and dispatched the remnants with the help of Font.  After the battle, he gives some of the bread he made to Font to bring back to Curtis Ruthko as a regard. 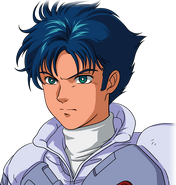 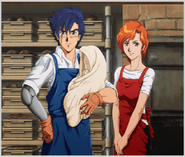