He wears a mask with the same colors as the German flag (with pom-poms) that completely covers all but his eyes, and uses a martial art called "German Ninjutsu". He is a man with an excellent eye for observation and intelligence who occasionally appears to Domon Kasshu to point out his problems and give him precise advice.

Schwarz first appeared in the Shinjuku area of Tokyo after Master Asia revealed to former pupil, Domon Kasshu, that he was a servant of the JDG-00X Devil Gundam. After the Devil Gundam withdrew from Japan, Schwarz defeated Domon in an unofficial Gundam Fight to prove to him how lacking his skills were. He challenged Domon to learn to use a rusty sword to slice apart trees a way to activate the Super Mode of his GF13-017NJ Shining Gundam. When Domon decided to train in South America's Guiana Highlands, Schwarz maneuvered Domon's fellow members of the Shuffle Alliance to come to Guiana and train with him. When the Devil Gundam reappeared in the Guiana Highlands, Schwarz was severely injured while trying to protect Domon from Master Asia. After Domon defeated the Devil Gundam, Schwarz appeared in Neo Hong Kong alive and well for the Gundam Fight finals. As the finals continued, Schwarz was the first to discover that Wong Yunfat had secretly transported the Devil Gundam to Neo Hong Kong with the intention of resurrecting it.

As the finals neared their end, Schwarz was assigned to fight Domon's GF13-017NJII God Gundam in the final match before the Battle Royale. While Domon was able to counter Schwarz's Sturm Und Drang with his own Sekiha Tenkyoken, Wong's treachery caused Schwarz to be mortally wounded. After the match, Domon was shocked to see that the unmasked Schwarz looked identical to his brother, Kyoji Kasshu, the pilot of the Devil Gundam. In the hospital, Rain Mikamura learned the truth about Schwarz and Kyoji. Earlier in the tournament, the Devil Gundam defeated the real Schwarz. Using the last of his free will, Kyoji used the DG Cells to turn Schwarz's corpse into an android that was modeled after himself and assigned him to protect Domon and watch over him. During the Battle Royale on Lantau Island, the Gundam Spiegel was destroyed when Schwarz faced the Devil Gundam. Schwarz then entered the cockpit of the Devil Gundam and grabbed Kyoji from behind in an attempt to free him, but it was in vain, as the Devil Gundam began to consume him. Schwarz eventually ended up sacrificing himself when Domon used the Sekiha Tenkyoken, which put an end to the second rising of the Devil Gundam.

Schwarz Bruder in the opening.

Schwarz Bruder in the Gundam Spiegel

Schwarz after his defeat against Domon in the Gundam Tournament

Death of the original Schwarz Bruder 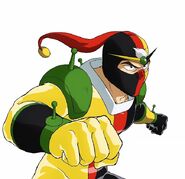 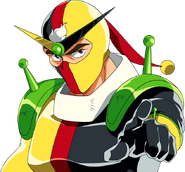