The Gundam Wiki
Register
Don't have an account?
Sign In
Advertisement
in: Characters, Universal Century characters, Female, Project: The Origin

Sayla was born as Artesia Som Deikun, only daughter and youngest child of influential philosopher and politician Zeon Zum Deikun and the younger sister of Char Aznable. When her father died, Artesia and Casval were whisked away from Side 3 by family friend Jimba Ral in order to avoid a purge of Zeon loyalists by Degwin Sodo Zabi. They were sent to Earth and placed under the care of the rich Don Teabolo Mass at his home in Spain. Mass renamed them to help avoid detection - Casval was named Édouard Mass and Artesia was named "Sayla Mass". Jimba constantly reminded Casval about the Zabi family's betrayal of his father, but Artesia was too young to be told such things.

After a failed assassination attempt (which killed Jimba), Artesia and Casval were moved to the Texas Colony under the watch of the colony's chief manager, Roger Aznable, but they were still under Mass' care. During this time, the siblings received word that their mother Astraia Tor Deikun had passed away. A deeply aggrieved Sayla spent most of her free time around her gravestone Teabolo erected, though her mother was given an pseudonym for fear of the wrong person discovering it. Following the subsequent passing of her cat, Lucifer, Casval and Roger's son, Char Aznable, both left the colony to join Zeon's growing army. However, Casval's shuttle heading to Side 3 exploded and everyone believed him to be dead. As the years passed, Sayla decided to go to medical school at Side 7.

By January U.C. 0079, Sayla had moved to Loum's capital banchi, Miranda, working in the Miranda Central Hospital. After she tended to a woman's injured son, an incognito Tachi O'Hara took her to the roof to inform her to keep an eye out for a red mobile suit piloted by the Zeon ace Char Aznable, and that Casval was still alive. As Tachi left a confused Sayla, she subsequently received a call about Teabolo, warning that he was in failing health. Returning to the Texas Colony, Roger Aznable stated to Sayla that he and his wife's intended to go to Zeon due to sympathy for Zeon's cause, but stated he didn't wish to see Char for the monster he had become. Sayla then visited the graves of her families and deduced from both Roger and Tachi's information that Casval had replaced Char.[1]

When rioters begin attacking Texax Colony under the mistaken belief they were pro-Zeon supporters, Sayla gave shelter to several civilians and ordered the house to be barricaded. She defended her home with a Winchester rifle, killing and injuring many of the attackers. During the brief ceasefire, Sayla learned that Teabolo expired during the fighting. The battle was interrupted when the rioters saw the light from explosions at nearby Miranda which destroyed a Zeonic passenger ship that Roger was on. Char stood atop the window above the Mass home in his MS-06S, this red mobile suit of his was quickly noticed by Sayla. [1]

Battle of A Baoa Qu

Sayla launches from the White Base piloting a customized GM mobile suit. During the battle, Sayla eventually encounters a Braw Bro piloted by Simus Al Bakharov and after an intense close-quarters battle kills her by shooting the Braw Bro's cockpit at point blank range with her beam rifle. The resulting explosion leaves her GM heavily damaged and Sayla ejects via the Core Pod, eventually crash landing at A Baoa Qu.

While traveling inside the base, Sayla is captured by Zeon security troops and taken prisoner. While she is bound and interrogated, she reveals to the interrogating officer that she is really Artesia Som Deikun, turning the tables on her interrogator. The stunned Zeon officer then reports to his commanding officer of the security company, Captain Matogurosu, about this new development. Captain Matogurosu himself goes down to the interrogation room to investigate, and upon seeing Sayla, realizes that she is in fact Lady Artesia. To Sayla's surprise, Captain Matogurosu renders a crisp military salute, orders her unbound, and pledges himself and his military forces to her.

During this time, Kycilia just assassinated Gihren and have taken control of all Zeon military forces. Captain Matogurosu's security company is mustered and upon seeing Sayla, realizes that Artesia Som Deikun has been alive and well all this time. Furious at the Zabi's actions and willing to revolt against Kycilia, the Zeon soldiers cheer the name of Deikun and pledge their loyalty and their lives to Sayla, who accepts their pledges with a heavy heart, wishing that her brother was there to see this moment. 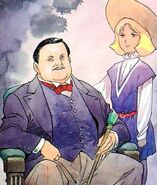