She is the orphaned child of Zeon Zum Deikun, and the younger sister of Casval Rem Deikun (aka Char Aznable). With the establishment of the Principality of Zeon by the Zabi family, she and her brother were secretly taken in by Jimba Ral, who was a member of the Deikun faction at the time. Afterwards, she becomes the adopted daughter of the Mass family in order to escape the persecution of the Zabi family, who are planning to turn the Republic of Zeon into a dictatorship, and changes her name from Artesia Som Deikun to Sayla Mass, and spends her time on Earth while hiding her true identity.

Later, when her brother left for Side 3 (Principality of Zeon), she moved to Side 7. At the time of her father's death, she was still too young to understand the situation, and unlike her older brother, who left for his own reasons, she grew up healthy and gentle in the Mass family, and did not have any negative feelings such as "revenge against the Zabi family". She aspires to study medicine, and has been staying at Side 7 as a medical volunteer.

When the Zeon attacked Side 7, Sayla is evacuated onto the SCV-70 White Base with a large group of other refugees. She volunteered to search for other people in the colony before White Base departs and encounters a masked Char Aznable, discovering that he is really her brother Casval in disguise. He manages to escape from her, and thus Sayla goes along with the pilot of the RX-78-2 Gundam, Amuro Ray, aboard the White Base, and become the ship's communication officer at first, as they take flight from Side 7 and en route to Earth, while they constantly try to fight off Zeon troops along the way, especially against Char Aznable, the "Red Comet" himself.

Once the White Base destroys Garma Zabi's fleet along with Garma himself, and as Ramba Ral keeps harassing the White Base in pursuit, Sayla believes that someone from Zeon might have some important information about her brother. Hence, she commandeers the Gundam from Amuro in her attempt to get closer with Zeon troops (on her pretense of proving herself a worthy pilot as much as Amuro), but instead, she gets hammered very badly under fire by Ramba and his troops. Fortunately, Amuro arrives in the RX-77-2 Guncannon to bail her out. Consequently, as a result of her reckless actions, Sayla faces 3 days solitary confinement as her penalty. Nevertheless, Bright Noa and the crew of the White Base recognize Sayla's skill as a pilot, so subsequently, Sayla becomes an alternate backup pilot of the Gundam, next to Amuro. Later, she becomes the pilot of G-Fighter (Core Booster in the compilation), and shows great promises throughout numerous battles, especially with her newfound Newtype skills. She and Amuro grow steadily close with each other as well, as they both keep facing countless battles alongside with each other.

When the White Base was boarded by Ramba Ral and his troops, Sayla was piloting the Gundam. After giving the controls to Amuro, Ramba recognized Sayla as Artesia, as he was Jimba's son. Sayla then remembered meeting Ramba as a child, but their reunion was cut short, when he was shot by Ryu Jose. Hence, Ramba then ordered a retreat, since Artesia was on board, and killed himself by exploding a grenade, while jumping into the Gundam's hand. Sayla is both shocked and saddened by his death. Likewise, she feels exactly the same way with the crew of White Base, as she watches some of her close comrades falling in battle one after another, especially Ryu Jose, and Lieutenant Matilda Ajan, as they each try to protect the White Base from deadly destruction and devastation. The death of Matilda is particularly hard for Sayla to accept, because she feels helpless and guilty for unable to save her life as a pilot.

Throughout the conflict, Sayla attempts to contact her brother. They encounter each other again in the Federation military headquarters of Jaburo, and he asks her to leave the Federation Forces, but she refuses. They meet again at the Texas Colony, where Char explains his true origins, and that he's joined the Zeon army to get close to the Zabi family in order kill each member to avenge their father. He wants Sayla to avoid war, so he sends her a briefcase full of gold bars intended to help her start a new life on Earth. Sayla soon admits and confesses to White Base captain Bright that Char is actually her brother. In return, Sayla sincerely requests Bright to distribute the gold bars and share them with the crew of White Base, since she's become attached to them like a family by that time.

Sayla is almost killed by Char during a skirmish between his troops and the White Base, but he hesitates when Lalah Sune warns him not to strike the G-Fighter/Core Booster, allowing Amuro Ray to cut off his mobile suit's arm and nearly kill him, but Lalah takes the blow for him and dies from Amuro's piercing Beam Saber by accident. During the Battle of A Baoa Qu, Sayla crash-lands into A Baoa Qu and finds Amuro and Char, their mobile suits destroyed, fighting with swords in mortal combat. She intervenes and begs them both to stop. When he sees Sayla, Char is reminded that the Zabis are the real enemy, and he heads off to finish his revenge, telling his sister to leave with Amuro and have a good life with him. Sayla escapes the fortress alive, as does Amuro soon after.

In a villa somewhere, Sayla watches with a melancholy expression on his face as her brother "Quattro Bajeena" gives a televised speech in Dakar, in which he reveals his identity as the "Red Comet" who served the Principality of Zeon in the One Year War. At the end of A New Translation she is sunning herself by a pool when approached by Kai Shiden who thanks her for summoning him and tells her he has questions about Quattro Bajeena who at this point has recently become missing in action.

In the manga "Mobile Suit Zeta Gundam Define", she works as a doctor at a hospital in North America, and Quattro Bajeena comes to see her to get in touch with Amuro. During this visit, it is mentioned that Sayla and Amuro had a relationship (lovers) and how they needed each other right after the One Year War. She introduces them, but says that he is "not the Amuro he used to be".

In episode 28, Judau Ashta's sister, Leina Ashta, was thought to have been killed in battle, but it is revealed in episode 46 that she was actually saved by Sayla and is safe. In the same episode, Sayla appears with Leina in front of Bright, and she tells him that she is now living as an investor. She is also expresses that her missing brother is alive somewhere, waiting on the sidelines for the right time to emerge again, and remarks that his ambitions are dangerous and that his death may be the only solution for peace.

In the anime version, she seems to have had a faint crush on him, and was even teased by Fraw Bow. The novelization is more apparent about a romance between the two. Sometime after they are both assigned to White Base, Amuro asks Sayla out to dinner. The two of them eat and chat, and discuss what it's like to be Newtypes. Later, Sayla visits Amuro in his quarters after-hours and the two of them share a night of love-making, thus starting a very intense romantic relationship between them. When Amuro is killed by Char's mobile suit forces at the end of the story, Amuro's mind takes one last moment to reach out to Sayla's and expresses his love for her, along with his regret at not being able to spend his life with her. Sayla returns the affection and later tells her brother that he killed the man she loved. At the end of the war, Sayla communicates to Amuro's consciousness, and he tells her that he is with her.

Sayla in the original series. 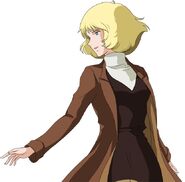