A terrorist who caused the terrorist attack on the Junius Seven. After losing his girlfriend (Christy) in the Blood Valentine Incident and his comrade-in-arms (Alan) in the First Alliance-PLANT War, he has a strong hostility toward the natural world. For this reason, he does not approve of PLANT's policy of maintaining the truce, and agrees with Patrick Zala's idea of destroying the naturals by considering the Coordinators as a new species. Together with a group of ZAFT deserters who share similar ideas, they plot to eliminate the naturals by dropping the Junius Seven, the location of the incident that started the war, onto the Earth.

Sato and his group boarded the GINN High Maneuver Type 2, painted in black, and interfered with the ZAFT troops who tried to crush the Junius Seven in order to limit the damage to Earth. Sato fights against Shinn Asuka and Athrun Zala, who were participating in the crushing operation and the elimination of the interference, and tries to stop the final crushing operation that Athrun was about to carry out. However, Shinn prevents him from taking Athrun with him, and Sato is killed when his GINN High Maneuver Type 2 crashes into the wreckage of the Junius Seven as it falls to Earth.

Although he didn't know that Patrick Zala's son, Athrun (aboard the ZAKU Warrior), was among the enemy's forces preventing the Junius Seven from falling, Sato's comments were a shock to Athrun and became a major factor in his decision to join the ZAFT forces.

In "Mobile Suit Gundam SEED Destiny ASTRAY", he is portrayed as a terrorist who lost his daughter in the Blood Valentine incident.

Lacus Clyne later discovers that all of Sato's ZAFT files have been erased by an unknown party (heavily implied to be Gilbert Durandal).[1] 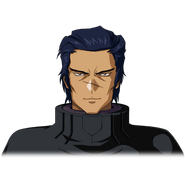