A cadet at the Titans' private Newtype laboratory, Sarah's talents caught the attention of Paptimus Scirocco, who quickly recruited her to serve in combat against the AEUG. For her first mission, she and another Newtype trainee named Sydle were placed under the command of Jerid Messa, who merely expresses his contempt at their youth and inexperience. He asks Sarah if she is ready to kill and she replies that she would never kill anybody unless it was absolutely necessary. Jerid scoffs that the enemy will surely kill her with that kind of attitude. Nevertheless, he reluctantly leads Sarah and Sydle in an assault upon the AEUG's main battleship Argama. The mission ends badly with Sydle's death at the hands of Kamille Bidan and Sarah abandoning Jerid, forcing him to retreat as well. Scirocco gently scolds her for this and she promises not to let it happen again.

For her next mission, Scirocco sends Sarah over to the Argama and inform them about the Titans' plans to drop an uninhabited colony onto the lunar city of Granada. At first, Wong Lee wonders if it is a trap, but Bright Noa believes her, saying it is not entirely inconceivable for someone as young as she to question her superiors when they resort to such brutal tactics. Sarah is then taken to a room where she is interrogated by Kamille, who says he believes the part about the colony drop but not the rest of her story. He asks who sent her and she accidentally mentions it was Scirocco. As he leaves, Kamille asks Sarah if she is a Cyber-Newtype and finds Katz Kobayashi, who by this time had taken an interest in Sarah, waiting outside. Kamille tells Katz to stay away from Sarah saying that she is dangerous, but Sarah senses Katz's interest in her and waves at him innocently. Later in battle, Katz brings Sarah a normal suit to wear in the event that the air in her room should start leaking out. She thanks him and asks if he is going into battle, but he says no because there are no mobile suits left. Sarah offers Katz the use of her Hizack and he agrees to take her to the hangar under the impression that she will show him how to use it. Instead, Sarah tells Katz that the Gaplant piloted by fellow Titan Yazan Gable has a blind spot and pushes him away, making her escape.

In another attempt to destroy the Argama, Sarah is sent into Von Braun City to plant a bomb powerful to take out its entire port while the enemy battleship is docked there. After planting the bomb, she is spotted by Kamille, who demands to know what she is doing in Von Braun. She feigns a desire to talk with him and he asks why can't she do normal things for a girl her age like hanging out with her peers and enjoying some ice cream. Although Kamille is initially cordial enough to buy Sarah some ice cream, he tells her that Katz no longer trusts anyone because of her deception and that he will show her no mercy the next time they meet in battle. But Sarah, overwhelmed by Kamille's generosity, stops him from heading back to the Argama and tells him about the bomb. Kamille quickly tells the AEUG to evacuate the Argama and the park while he and Sarah try to defuse the bomb with no luck. Sarah tries to run away, but Kamille grabs her and knocks her out. She later finds herself back on board the Argama, but she manages to escape again. However, she looks back at Kamille while he is piloting the Zeta Gundam and says, "Thanks for the ice cream".

Sarah fights her last battle when she and Reccoa accompany Scirocco as he prepares for a meeting between Haman Karn and Jamitov Hymen. Upon hearing about this, Katz impulsively defies his superiors and takes off in the G-Defenser while concocting a scheme to kill Scirocco, hoping it would make Sarah come to her senses. Katz nearly succeeds while Haman and Scirocco are engaged in battle, but Sarah jumps in the way and takes the brunt of his attack, dying as her Bolinoak Sammahn explodes.

Despite the fact that Katz has just killed her, Sarah's spirit briefly appears to protect him from Scirocco, who angrily retorts, "She may forgive you! I'm not so indulgent!" Despite Scirocco's wrath towards him, Katz survives this encounter when his fellow AEUG pilots intervene and Sarah continues to watch over him (and Scirocco) until their final fight during Operation Maelstrom. Her spirit appears again as Katz lays dying in his G-Defenser and when Kamille is fighting Scirocco. She initially tries to protect Scirocco, but Katz, who by this time is also dead, tells her to listen to her heart for a change. Sarah is visibly moved by Katz's words and although this marks her final appearance in the series, Kamille ultimately emerges victorious over Scirocco.

She makes her final appearance as one of the spirits protecting Judau Ashta from Haman Karn in Mobile Suit Gundam ZZ. 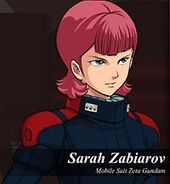 Retrieved from "https://gundam.fandom.com/wiki/Sarah_Zabiarov?oldid=435616"
Community content is available under CC-BY-SA unless otherwise noted.