The Gundam Wiki
Register
Don't have an account?
Sign In
Advertisement
in: Characters, Not Applicable/Specified characters, Female, Project: Build Series

Sarah (サラ, Sara?) is a character that appears in the Gundam Build Divers television series.

A soft-spoken, mysterious girl whom Riku and his friends meet in GBN. Her amazing intuition allows her to sense the special feelings that have been put into a Gunpla.[1]

She appears to have a strong sense of intuition about Gunpla and the GBN world in general. With a single look, she is able to see the amount of love that the builder had put into a Gunpla, as well as the 'feelings' that it has. She can also sense where a person is in the GBN World, and point out the location on a map. She has the ability to create a barrier to protect herself or her companions from harm.[2][3]

As an electronic lifeform (EL-Diver) within GBN, Sarah's growth causes bugs to occur at an increasingly alarming frequency, and the GBN's system is being strained as her data increases, a result of her gaining more emotions and memories. Although the system still had some room to tolerate it, this would not last as the bugs would eventually surpass those of the Break Decals.[3][4]

To save GBN, Sarah's data was transferred out into a Gunpla - the HER-SELF Mobile Doll Sarah. This unique Gunpla incorporated the PLA-NET Coating technology from the old GP Duel, thus allowing Sarah to move around in the real world. In this form, she can also log in to GBN, assuming her Diver Look and pilots the Mobile Doll Sarah's 'MS Mode'.[4][5][6]

According to Ms. Tori, Sarah is an electronic lifeform. When a Gunpla is recreated in GBN following the scan during the Diver's log in, and when its data is transmitted for missions and battles, excess data of around one-millionth of the total amount is unexpectedly added. Ms. Tori theorized that the tiny amount of data is of a Diver's feelings for Gunpla, and that Sarah was born through the combination of all this data.[3] Although Sarah is the first EL-Diver to be officially discovered, she is not the first to exist.

She meets Riku in Gunpla Battle Nexus Online (GBN). During battles, she sometimes accompanies Riku in his Gunpla's cockpit.

She meets Yukio alongside Riku in GBN. She accompanies him and Do-ji during the Mirror Mission [7].

Sarah and Momoka have a sisterly relationship, with Momoka treating Sarah like a little sister. Besides Riku and his Gunpla, Sarah also hitches a ride on Momoka's PEN-01M Momokapool. Momoka often defends Sarah and tries to take care of her, for example, Momoka is briefly seen feeding Sarah while the Build Divers are having lunch during the Beargguy Festival.

When Game Master learns that Sarah is an electronic lifeform that arose in GBN, and the cause of recent bugs with the potential to collapse the game in months, he quickly views her existence as a major threat to the game. Like others in the administration, Game Master prefers to call her using the impersonal term 'EL-Diver'. Since Sarah is the origin of the bugs, and there is currently no way to keep her in the system while eradicating the bugs, he has no qualms erasing her with the bugs via the creation of an update patch to maintain GBN’s stability. He merely sees her as a digital entity, comparable to that of a bug.[3]

Eve is considered Sarah's older sister. After May tells her and Riku about Hiroto's backstory as well as what had happened to Eve, she realized that she must have sensed her presense and willingly absorbed the bugs to prolong Sarah's life. [8]

May is considered Sarah's younger sister, the former addressing her as the older sibling. 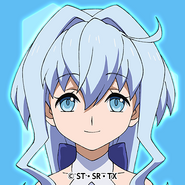