Sally Po (サリィ・ポォ) is a fictional supporting cast character and ally of the Gundam pilots in Mobile Suit Gundam Wing and its follow-up materials.

Sally appears to be a strong woman with blonde hair in the shape of sausage curls that go down the sides of her head. She is to be very loyal to her allies. She treats Heero and Relena with great respect. She holds the Gundam pilots in very high regard, particularly Heero as she believes he can make the impossible possible.

Sally was a soldier of the United Earth Sphere Alliance, assigned to colony A0206, where she unsuccessfully tried to convince General Septum not to use poison gas to 'cleanse' the colony. When the mobile suit force was wiped out, Sally pulled back and was sent to work in an Alliance hospital in Japan.

When the five Gundams were sent from Earth by the colonies to defeat OZ, one of the pilots, Heero Yuy, was brought to her hospital by Relena Darlian. Sally was amazed at how built he was, even for just a boy.

When the Gundams were tricked into killing the Alliance leaders who were calling for peace and demilitarization, OZ began a coup d'état. Simultaneously, OZ sleepers agents in all Alliance bases began to systematically eradicate all Alliance loyalists. Luckily, Sally led a brigade of troops that resisted OZ. At the New Edwards base, they attempt to stop two OZ soldiers from arming the bombs in an attempt to destroy the Gundams but it was too late. Unable to stop the countdown, Sally called out to Heero through the base's loudspeakers to ask him to disable the bombs up close.

OZ eventually located Sally's brigade and they would've been killed had it not been for the intervention of Chang Wufei/Nataku. Wufei instantly declare her and her troops weak. When OZ attacked again, Sally demonstrates to Wufei the will to fight, which enabled him to pilot Nataku with renewed strength.

When the Gundam Pilots return to space, Sally attempted to destroy the remains of the Gundam Sandrock before OZ could use it. However, as she set the bomb, she is confronted by members of the Maganac Corps, a group of men loyal to the Gundam's pilot, Quatre Raberba Winner, who were planning on stealing back Sandrock once OZ finishes repairing it. Sally quickly detonates her bomb but amazingly, it fails to destroy the pieces. This commotion sets off the alarm. The Maganac quickly stows the pieces aboard a plane, as Sally covers their escape by hijacking a Leo suit.

Later on Sally was able to locate the Wing Gundam that Heero had left behind on Earth. Shortly afterwards her transport carrier was attacked by OZ, and she was captured, but managed to hide the Wing Gundam. However noticing that OZ was only keeping her alive until they verified the contents of what was in her carrier, Sally realized the rumors she was hearing about the Gundam pilots returning to Earth was true. As she was breaking free from her restraints, Sally was assisted by ex-OZ soldier Lucrezia Noin. The two successfully recover the Wing Gundam and Sally allows Noin to have it, suspecting that Noin was representing the Sanc Kingdom which was actively opposing Romefeller's actions, despite Noin never having the chance to tell her. At some point Sally was able to pass on information to Noin that the Maganac Corps have the Sandrock, which Noin passed on to Quatre.

Following the White Fang's declaration of war against the Earth, Sally met up with Heero in the Wing Zero as he was prepared to head back into space and revealed that she had located Trowa's Gundam Heavyarms and travels with him up into space. Shortly after recovering Wufei and his damaged Altron Gundam, their transport carrier reached Peacemillion where the other Gundam pilots were. For the remainder of the conflict, Sally served as a battle commander aboard Peacemillion and during the final battle had Peacemillion ram into Libra to disable its main cannon. Sally and the Peacemillion crew then transfer over to the OZ satellite MO-II and watch the remainder of the conflict from there.

In the years leading into the Mars Century, Sally Po has been classified as missing in action. However, her daughter Kathy-Po has long since taken her place among the Preventers. 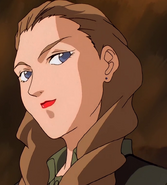 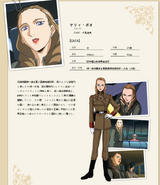