The Salamis-class is the main cruiser of the Earth Federation Forces. Introduced in October of U.C. 0070, the ship saw use long after the One Year War and was improved several times.

The Salamis-class is a mainstay space cruiser that was built in large numbers alongside the Magellan-class as part of the Armament Reinforcement Plan in U.C. 0070. The Salamis class was mainly constructed on Earth and equipped with supplemental boosters to escape the atmosphere. It has high potential as a general-purpose cruiser due to its rapid-fire mega particle cannons and missiles controlled by the Phalanx system. While feared before the One Year War, these armaments, which rely on radio-controlled precision guidance, are hindered by Minovsky particles. As a result the ships were forced into close-range air defense combat. However, due to the placement of its turrets, the Salamis-class has fewer blind spots than the Musai-class, though conversely it cannot concentrate as much firepower in any single direction or focus all of its weapons on one point. While the Salamis-class was originally armed with conventional cannons, by U.C. 0079 all of the cruiser's turrets had been upgraded with superior mega particle cannons.

While not as powerful as the turrets of the Magellan-class, these beam turrets were effective anti-ship weapons. Unfortunately, they were not as useful against the Principality of Zeon's mobile suits. The Salamis-Class has six of these turrets as its main armament.

These weapons formed the Salamis-class' anti-aircraft weaponry. Four turrets that protected the bridge while two more turrets were mounted in large balls at the end of struts towards the front of the cruiser. The turrets could rotate 180 degrees from pointing directly ahead to directly aft and could elevate their firing angle up to 90 degrees. These turrets were usually too few in number to provide an adequate defense against mobile suits.

A 6-tube anti-aircraft missile pod is mounted on each side of the ship behind the mega particle cannons.

The Salamis Class ships seen during the Battle of Loum had the two ball turrets upgraded to 3-barrel machine guns. It is unknown if this variation was an older model of the cruiser or a modification made to only a few ships to counter Zeon mobile suits.

A small shuttle capable of making atmospheric re-entry is located underneath the bow of the Salamis-class. The shuttle could also double as an escape craft in the case of an emergency.

A supplemental rocket booster system can be attached to the main engine thrusters of the Salamis-class to enable it to leaver Earth's atmosphere, including from the underground Jaburo base.

The remaining ships of the Federation's fleet were redeployed into combat zones with the new RGM-79 GM mobile suit and RB-79 Ball mobile pods for protection. Unfortunately, the Salamis-class ships could only store their new mobile suits and mobile pods on their outer hull, as they lacked any sort of hangar bay. Although the Salamis class would suffer even more causalities throughout the remainder of the war, they proved to be more effective when used in conjunction with mobile suits, which would play a role in the Salamis Kai design a few years later.

The Fate of the Salamis Cruiser

The Salamis-Class was first upstaged by the Alexandria-class heavy cruisers during the Gryps War but still continued to play a major roll as a major warship for the Earth Federation, AEUG, and the Titan task force. But the Salamis model would not be mostly discontinued until U.C. 0102, in favor of the newer Clop-class cruisers, but due to its firepower it still saw limited mass production. However, the Salamis Kai-class cruisers would continue to see service in the Earth Federation, as they were still very useful even in the late UC era. 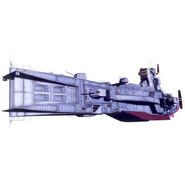 A Salamis cruiser being attacked by Char's Zaku II during the Battle of Loum (from MS IGLOO: The Hidden One Year War OVA)

The Salamis sacrifices itself for Albion's escape (0083 Rebellion)