Sala Tyrrell(サラ・タイレル) is a fictional character from the After War Gundam X anime.

Sala Tyrrell is the First Officer of the Alps-class Freeden as well as its operations officer. Sala first took command of the Freeden when Jamil Neate was injured following the rescue of Garrod Ran during a meltdown at an abandoned nuclear power plant. While commanding the Freeden she decided to go with her own instincts and judgment instead of the insight and advice given by Tiffa Adill's Newtype abilities. The conflict between Tiffa and Sala was fueled not only by her lack of understanding of Tiffa's Newtype abilities but also a sense of jealousy as Jamil spent more time and attention on the younger girl. This conflict led the Freeden to be put in danger when it encountered Ennil El and Zakott Dattonel as Sala ignores warnings of danger from Tiffa. The ship is saved in time by a phone call by an injured Jamil Neate to the bridge, and the quick work of Garrod Ran. Sala resumes her position as operations officer when Jamil recovers from his injuries and starts to appreciate the abilities of Tiffa as the young girl proves herself again and again in service to the ship and crew.

When Jamil takes over as the pilot of the GX-9900-DV Gundam X Divider, Sala again takes command of the Freeden while he is engaged in battle, directing the ships crew through their engagements with the New United Nations Earth military. While commanding the Freeden, Sala found herself torn between her feelings for Jamil and her growing feelings for GT-9600 Gundam Leopard pilot Roybea Loy. These feelings later came to a resolution on the eve of the Freeden II's launch from Earth to take part in the 8th Space War as Roybea proposes to Sala before the battle. Torn by her emotions she tells Roybea that she shall consider his proposal and later confronts Jamil in the elevator to find out his thoughts and feelings.

Following the 8th Space War, Sala chooses to stay at Jamil's side and enlists in the New United Nations Earth military, accompanying Jamil in negotiations with the Space Revolutionary Army for peace and continued relations. 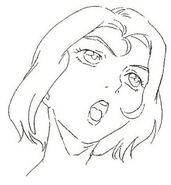 Retrieved from "https://gundam.fandom.com/wiki/Sala_Tyrrell?oldid=412482"
Community content is available under CC-BY-SA unless otherwise noted.