During the battle of Loum, Saki lost her brother. In order to avenge him, Saki volunteered to join the Wolf Gar Team in order to defeat more enemies. Because of this, she was the only member of the team who was not a criminal. She was in charge of intelligence analysis and acted as the team leader, Henry Boone's assistant.

On October 9th, U.C. 0079, Saki and the rest of the Wolf Gar Team was cut off from the main unit after the defeat at Odessa and became lost in the Gobi desert. Just as they were running out of supplies, they discovered a Federation base in the middle of the desert and raided it.

The team eventually discovered that the base housed a new Gundam - the RX-78XX Gundam Pixy. In order to destroy the Gundam, Saki and the rest of the team attacked the base two more times, but they were defeated each time. In the final battle, her Zaku was destroyed, but she survived.

After Captain Henry Boone's MS-08TX Efreet was defeated by the Gundam, she was found by the Gundam's pilot, Bork Cry. Though she refused to be captured and asked Bork to kill her, he convinced her to return to base with him and promised that he would let her go free after her wounds heal.

In the remake of Cross Dimension 0079 in Mobile Suit Gundam Side Stories, during the final battle, she snuck onboard Noct Gaddish's Medea and detonated a bomb, sacrificing herself in order to kill more enemies. 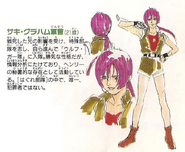 From SD Gundam G Generation Genesis
Add a photo to this gallery
Retrieved from "https://gundam.fandom.com/wiki/Saki_Graham?oldid=460817"
Community content is available under CC-BY-SA unless otherwise noted.