The series mostly centers around the two princes of the Britis Kingdom, Crown Knight Blue Gundam and Crown Knight Red Gundam, and their adventures as they ascend to become the next kings of Britis.

After the creation of the new Saddrac World, the kingdom of Britis was at peace. One day, an incident happened relating to the relief on the inherited King Shield. The contracts with the phantom beasts that protected the kingdom had expired so King Gundam III sent his two sons, Crown Blue Knight Gundam and Crown Knight Red Gundam, to renew them. The older prince, Blue, goes to Heliopolis Plain and the younger prince, Red heads to the sea of Orb to undergo the trials of the phantom beasts. Upon overcoming the trials, Blue transforms into Crown Knight Strike Gundam and Red transforms into Crown Knight Aegis Gundam. However, Strike is attacked by Black Knight Banshee while Aegis encounters the Anti-Union Army at Onigoro Island. During these attacks, black clouds form over Britis.

Knight Unicorn, who had confirmed the growth of Crown Knight Aegis, tries to return to Britis Castle quickly by opening a time tunnel and is attacked by Banshee. During their fight, Banshee steals the Magnum Sword and they chase after each other. Meanwhile, the two princes return to Britis's castle town, Barlinton, and find out that their father had been defeated by Banshee and that the Anti-Union Army occupies Britis Castle. With the cooperation of the Algus Knights, the princes divide the army to retake the castle and infiltrate the castle via an underground pathway. Waiting for them at the end, however, is Tyrant Noir, King Gundam III who had been possessed by the monster known as the X Soul and was transformed into a tyrant of darkness.

Although he was purified, King Gundam III was robbed of his power by the X Soul, was weakened, and was slowly approaching death. In order to slow this, mineralization magic was used on him, but it won't last long. The princes find out a way to help their father from Beast King La Gowe, and with assistance from the Red Pirate's captain and Crimson Knight Sinanju, head for the Netherworld. While on their way, they are attacked by the Anti-Union Army, who had decided to attack at night, but are assisted by Sinanju. After undergoing three trials imposed on them by the gatekeeper Turn A, the brothers become Crown Knight Freedom Gundam and Crown Knight Justice Gundam. They are then given a quest by Queen Diana to slay the evil dragon that had stolen their father's power. Afterwards, they are given the netherworld's holy grail and return to the surface.

For his achievements, Crown Knight Freedom is decided to become the next king. However, upon meeting Sinanju Stein in the netherworld, Crimson Knight Sinanju has gone missing as he was after the Netherworld's holy grail. As a result, the 13 members of the Knights of the Round Table are left to prepare for his assault. During the coronation ceremony, Sinanju appeared alongside Eclipse Providence and destroyed Freedom's machine soldier via self destruction. During the chaos, he took the holy grail and used it to open the gates to the Netherworld, releasing the fallen Zeon Clan. Eventually, this causes Sieg Zeon to be resurrected as Sieg Zeon Ignis. During this battle, Knight Justice shows the vessel of a king within himself and becomes King Gundam V and uses the power of the Knights of the Round Table plus the holy sheath Invincible to defeat Sieg Zeon. Afterwards, King Gundam V succeeds the throne while his brother becomes Britis Duke Strike to follow his desire to travel the world.

In one era, Black Knight Banshee attacked the Garden of Wisdom, which holds the entire history of the Saddrac World. As a result, the elements of fire, earth, water, light, and darkness collapsed in various time periods and caused the revival of a powerful dragon with each element. To combat this, Knight Unicorn Gundam took Crown Knight Strike Gundam with him through time to seal each of the dragons. However, Banshee has planned for this and was able to release the seals after Crown Knight Strike departed as Britis Duke Strike. What fate lies ahead for him...?

In the lawless kingdom of Zaft, two knights had appeared. One was Knight Impulse and the other was a cloaked older knight, Knight Victory. The were investigating the city, but are attacked by knights from various eras of Saddrac. The final of these knights, Zero Gundam appeared before Impulse and fought him. The two fight each other using the Thunder Sword. Meanwhile, Vassal Duke Strike Freedom and Knight Unicorn Gundam, who were traveling the world, were also attacked while in Zaft. This time, it was by Devil Dragon Knight Destiny and Unicorn is forced to use the forbidden Phantom Beast Armor to fight him...

After Impulse was kidnapped in the previous chapter, Knight Unicorn went on a journey to train. On his journey, he receives a telepathic message from Fairy Princess Mineva, who tells him that she has been kidnapped by the Shamblodon. He is guided to Industrial Seven Village and decides to help out the villagers rescue Mineva. While traveling through Dungeon Megalanica, they encounter Black Knight Banshee, who joins their group to obtain more power. The group enters the depths of the tunnels and fight the Geara brothers. After they are defeated, the Shamblodon appears and possesses Banshee. Knight Unicorn, who was forced to equip the Phantom Beast Armor, and Banshee, who has become Black Knight Banshee Norn, are forced to fight each other to become the new guardian of the Laplace Box.

Knight Unicorn Gundam returns from his training journey and meets up with Vassal Duke Strike Freedom. During that time, Knight Impulse was revealed to be in the Zaft Clan's Mobile Fortress Minerva. Meeting up with forces from Dabat, the group begins their attack on the fortress. Meanwhile, Stella Gaia and Knight Lunamaria sneak into the fortress to deliver a shield to Impulse. Using the shield's Storm Runeshard, he escapes from his prison and is confronted by Destiny. The two fight, with Impulse being the victor, but the True Thunder Sword has shattered...

New Generation Knights of the Round Table

A group of elite knights that protect the kingdom of Britis. At the beginning of the work, they were lead by King Gundam III, but leadership changed over the course of the series. Note that this list is for the members at the end of the series.

The first prince of Britis. A confident young man who pushes himself in the shadows.

The second prince of Britis. A charismatic genius that grew up without an interest in the throne. Due to this, he can get along well with anyone without worrying about differences in class.

A diligent and serious young man from a distinguished family that has served the royal family for generations. He is the servant of Crown Blue Knight Gundam, who he is like an older brother to.

An adventurous young man who has masters swordsmanship from a foreign country. While he tries to speak in an old-fashioned tone, it breaks as soon as he becomes panicked or excited. He is the servant of Crown Knight Red Gundam.

A mysterious white knight who can use "Call" magic to summon heroes and items from cards. His true identity is the Unicorn beast spirit given the form of the Gundam Clan to keep the reborn Saddrac World stable.

A member of the Eternal Wind pirates. He serves as their leader in place of the young Captain Lacus. A heavy drinker with an energetic personality. In Tyrant of Darkness, he sneaks into Britis Castle with the princes via a hidden entrance in the Round Table room where it is revealed that he is one of the chosen members of the Knights of the Round Table.

The older form of Knight F90 Junior from SD Gundam Gaiden: Knights of the Round Table. The head of the Knights of Britis. A master swordsman that can handle all kinds of combat utilizing various equipment.

The older form of Heavy Warrior F90 Junior from SD Gundam Gaiden: Knights of the Round Table. The F90 Junior brother who inherited his father's title. The chief of the guard units. He loves the two princes as if they are his grandchildren, which is reciprocated by the princes.

The older form of Mage F90 Junior from SD Gundam Gaiden: Knights of the Round Table. After a previous battle, he chose the way of clergy and became the head of the cleric unit. He was captured in Britis Castle by the Anti-Union Army, but was rescued by the two princes.

A vigorous young knight who is the son of Silhouette Lord Gundam F91.

A decendent of ancient beast kings who lived in the Britis area. A cheerful person with a strong sense of justice who briefly worked with the Anti-Union Army in Tyrant of Darkness. During this time, he was a shapeshifter who challenged the princes upon entering the Round Table room. In Another Holy Grail, it was revealed that he was actually testing the princes in place of King Gundam III to see how much their strength has grown. It is then that he becomes a Knight of the Round Table.

The tomboyish granddaughter of Dark Knight Gundam Mark II and Storm Knight Gundam Mark II. A Britis Knight trained in the teachings of Runeshifter Clan, a clan that transforms using magic in order to adapt as the situation demands it. She rides a mechanical horse named Mechanititan, after her grandfather's horse. One of her seen transformations is based on the RX-121-1+FF-X29A Gundam TR-1 (Hazel-Rah).

A female knight who dresses in maid-like armor. Knight-of-Blue-Flame Gundam F91's servant. Her relationship with Blue Flames, who she addresses as "young master", is like that of an older sister. She is also trained in the arts of the Runeshifter Clan. One of her forms is the machine soldier-sized Giganto Shift (based on the Woundwort's Gigantic Form), which resulted in mild trauma for Blue Flames when he saw it at a young age.

The current king of Britis and leader of the Knights of the Round Table. He has kept a close relationship with the Red Warrior Clan, who are skilled with building Machine Soldiers. In Tyrant of Darkness, he is possessed by the X-Soul, resulting in his transformation into Tyrant Noir.

A Britis Machine Soldier pilot. He is the childhood friend of Crown Blue Knight Gundam who helped remodel and enhance his Vatras Sword. He has a quiet personality, but he is also secretly feared due to being calm and sharp.

Order of the Algus Knights

The Guardian God of the Saddrac World who took the place of Superior Dragon. 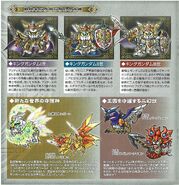 Character file from the Tyrant of Darkness arc.

Character file 1 from the Another Holy Grail arc. 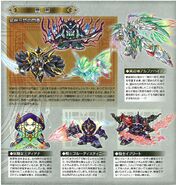 Character file 2 from the Another Holy Grail arc. 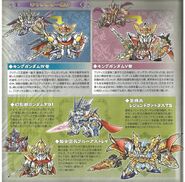 Character file 1 from the Birth of a New King arc. 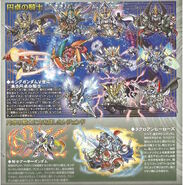 Character file 2 from the Birth of the New King arc. 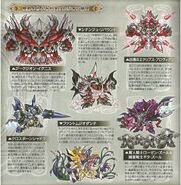 Character file 3 from the Birth of a New King arc.

Character file 1 from the Unicorn Knight VS Destiny Knight arc. 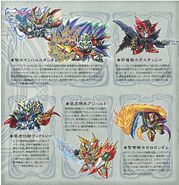 Character file 2 from the Unicorn Knight VS Destiny Knight arc.

Character file 1 from the Phantom Beast Knight Over Time arc. 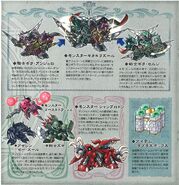 Character file 2 from the Phantom Beast Knight Over Time arc.

Character file 1 from the Final Clash of the Thunder Sword arc. 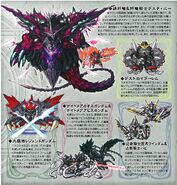 Character file 2 from the Final Clash of the Thunder Sword arc.

Knight Impulse, Destiny, Lunamaria, and Stella Gaia
Add a photo to this gallery

Retrieved from "https://gundam.fandom.com/wiki/Saddrac_Knight_Saga?oldid=434963"
Community content is available under CC-BY-SA unless otherwise noted.