The Sadalahn-class (Sadaran) is a battleship class first featured in the anime Mobile Suit Gundam ZZ.

The Sadalahn-class is a third-generation flagship-type battleship deployed by the Neo Zeon during the First Neo Zeon War. It is armed with six twin Mega Particle Cannons, two large mega particle cannons, multiple missile launchers, and numerous anti-air laser guns, making it arguably one of the most heavily armed battleship of her time. The number of mobile suits it can carry is unclear, and unlike most ships, its main bridge is located midship, above the mobile suit deck. The tower at the rear of the ship is a sub-bridge, which also serves as a dummy bridge.

Thanks to the Minovsky Craft System, the Sadalahn has no problem flying in the Earth's atmosphere. It can also be equipped with the Ballute System for atmospheric entry; this system deploys a bowl-shaped ballute (balloon parachute) to shield the vessel against the devastating heat during descent. The ship also sports a holographic device, with projectors on the extremes of the board, that the charismatic Haman would use to project her image in space and spur her troops on.

Following the Gryps War, which saw the defeat of Titans by AEUG, now greatly weakened, Haman Karn lost no time in regrouping her forces to take over the entire Earth Sphere. To achieve this, she would repeat what the Principality of Zeon did by forming a land invasion force to seize control of the Federation's strongholds on Earth. A new flagship was commissioned, the Sadalahn, capable of carrying Haman and figurehead Mineva Lao Zabi to personally supervise the operation and later officiate at the ensuing ceremonies on Earth.

Although not completed until after the start of the First Neo Zeon War, the Sadalahn was still finished in time to take part in the early days of the war, and used as the flagship leading the invasion of Earth.[1] The Sadalahn remained as Haman's flagship throughout the First Neo Zeon War, and was most notably used to lead Haman's fleet during the Battle of Axis against Glemy Toto's rebel faction.[2] The Sadalahn became one of the few Neo Zeon warships to have survived the battle and the collision of the asteroid Axis and the colony Core 3, an act of desperation from the Neo Zeon rebels led by Glemy Toto before their demise. After Haman's death at the end of the battle, the Sadalahn was captured by the AEUG support fleet that came to reap the spoils.[3]

In U.C. 0089, the Sazadan appears with a Neo Zeon remnants fleet in the vicinity of the Side 2 colony Olympus in battle with an AEUG fleet. It is later sunk when the ship's bridge is destroyed by a beam saber.

The Midalahn was constructed by the Zeon Remnants organization Zeon Mars (with cooperation from Axis Zeon) when they still controlled the Mars region. Although it is the sister ship of the Sadalahn, its bottom hull catapult and overall appearance is similar to the Gwadan-class [4]. The Midalahn became the flagship of the Zeon Mars fleet and was commanded by the son of Outlaw Chester, the leader of Zeon Mars. The Midalahn departed for the Earth Sphere in response to Neo Zeon's invasion of Earth. However, the fleet would return to Mars following the civil war that broke out between the Haman loyalists and the Glemy Faction as it was a faction that did not belong to either. 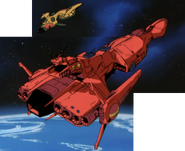 Entering the atmosphere with deployed Ballute