This article is about the mobile suit. For the anime series this unit is named after, see Turn A Gundam.

SYSTEM ∀-99 (WD-M01) ∀ Gundam (aka Turn A Gundam, White Doll, White Devil and also reffered to colloquially "Mustache" by the Diana Counter, the Earth Malitia and civillians) is a fictional mecha from the CC (正暦 Seireki) calendar system and is the titular mobile suit of Turn A Gundam It is piloted by Loran Cehack.

The ∀'s main propulsion was provided by an I-field Beam Drive System, which left the suit completely hollow and allowed it to be filled with extra armaments and rocket thrusters. Standard armament consisted of two beam sabers and a beam rifle. The ∀ was also equipped with an I-Field barrier which could protect it from various sorts of attack, including nuclear weapons. It is also capable of utilizing some form of teleportation system, allowing it to "vanish" from one place and reappear later.

Its onboard nanomachines are capable of an attack named "Moonlight Butterfly" (named after the effects of the attack when active). It is said that the attack has 3 requirements, the nano-machines, the energy to use them and finally the program to activate it.

∀ was originally designed for interstellar warfare. Unlike mobile weapons from previous timelines, ∀ Gundam is powered by a DHGCP powerplant (Discontinuous Hyperoscillation Gauge Collapsing Pile) which is essentially an artifical blackhole. The powerplant leaves the chest cavity of Turn A open, allowing various equipment to be placed inside, as evidenced by ∀ holding Nuclear Warheads within the cavity. To futher enhance its combat power, ∀ Gundam also has a large support unit called the DOC Base (Device Operation Control) which hold various armaments for ∀ Gundam, allowing it to be quickly refit according to situation at hand. One of the DOC Bases was discovered in the series, although it was more or less rendered unusable by the Moonlight Butterfly, with the only surviving and usable weapon being the hyper hammer, having been heavily coated with nano-machines, thus preserving it.

It is also capable of total regeneration of both itself and its pilot, (however, this is not instantaneous and can take some time) the ability to warp beam shots directly into enemy cockpits through unknown means, and teleportation. However, these are not shown in the series, and are not firmly placed in the canon.

After accompanying the Willgame to the Moon, Loran finally learned the dark truth about the ∀'s past, that the ∀ had been responsible for the destruction of Earth's history by unleashing its "Moonlight Butterfly" attack, spreading nanomachines across the Earth's surface (And through space, to Jupiter, with the exception of the moon) and turning all technology into sand. After learning of this truth Loran also discovered several features of the ∀ that he was unaware of, most notably that the cockpit was a Core Fighter capable of separating from the ∀; also Loran discovered the ability to make the ∀ vanish from sight by means unknown. During the ∀'s final battle with the Turn X, both machines unleashed their Moonlight Butterfly systems at one another; Loran escaped unharmed, but both machines were encased in a large cocoon - along with the pilot of the Turn X, Gym Ghingnham. 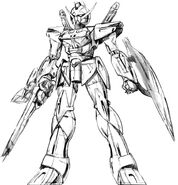 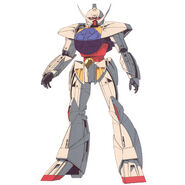 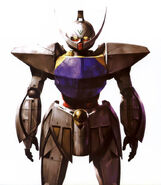 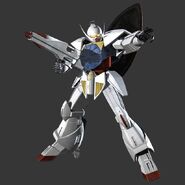 Turn A Gundam in Gundam Musou 3 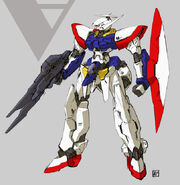 Turn A Gundam redesign by Takayuki Nanase (a.k.a. Windfall)

Turn A Custom Gunpla
Add a photo to this gallery