As Union ace pilot, Graham Aker, had vowed before the grave of his subordinate, Howard Mason, that he would defeat the Celestial Being's Gundam using a SVMS-01 Union Flag-type unit, he refused to be one of the pilots for the 30 GNX-603T GN-Xs provided by a traitor of the Celestial Being.[1][2][3][4] Subsequently, at Graham's request, Billy Katagiri, created the makeshift Union Flag Custom II (aka GN Flag) by installing the SVMS-01E Graham's Union Flag Custom (Over Flags' Ver.) (aka Custom Flag) with a GN Drive Tau taken from the GN-X unit 21, the machine meant for Graham.[3][4][5][6] This GN Drive Tau was also known as GN Drive Tau unit 21, and Billy acquired it through the influence of his uncle, Homer Katagiri.[7][8]

A major factor in the successful conversion of the Custom Flag into the GN Drive Tau-equipped GN Flag was the knowledge the Union had gained from the analysis of the remains of the destroyed right arm of the GNW-001 Gundam Throne Eins and the associated GN Beam Rifle.[9] During an earlier battle, Graham's Custom Flag had severed the Throne Eins' right arm, but the arm and the rifle it held exploded soon after.[1][9] The remains of these parts were then recovered and analyzed by the Union's Iris Corporation, leading to the Union gaining insight into the Gundams' armor, internal frame material, etc.[9] Additionally, the GN Beam Saber the Custom Flag captured from the Throne Eins during that battle was utilized as the main weapon of the GN Flag.[9][10][11][12]

While the GN Flag was not transformable like the Custom Flag, it was highly mobile and can fight evenly with a Gundam in close combat.[4][12][13][14] However, it had poor balance as the GN Drive Tau was forcibly integrated into a mobile suit not meant to use it, but Graham was able to compensate with his advanced piloting skills.[3][5][11][15] Besides serving as the power plant for the mobile suit and enabling the operation of the GN Beam Saber, the GN Drive Tau also produces GN Particles that can be used for propulsion among other uses.[10][12][13][14] The GN Drive Tau was normally attached to the end of the swing mechanism mounted on the GN Flag's back, causing it to be positioned behind the waist.[4][10][11][14] When the mobile suit transitions from cruising to combat, the swing mechanism moves the GN Drive Tau for mounting to the back of the left shoulder, where it then powers the GN Beam Saber.[3][4][5][14]

Besides relying on GN Particles for propulsion, the GN Flag also had several conventional maneuvering thrusters.[14] In particular, the two sub thrusters on the sides of the legs not only improve the machine's mobility, but also serve as Defense Rods for blocking enemy attacks.[3][5][12][14] Another defensive equipment was the GN Field generators on the elbows.[12] Other notable features included larger shoulder armor compared to the Custom Flag due to the installation of GN Particles duct, etc., and the orange sensor section on its face can split apart briefly prior to battle, but the purpose for this is unclear.[11][12][13][14] Graham seemed to be subjected to high Gs when piloting the GN Flag as blood was seen around his mouth when battling the GN-001 Gundam Exia, this suggested inadequate G-force dampeners or the disabling of the anti-G limiter was inherited from the Custom Flag.[14][16]

One of the advantages Billy saw in creating the GN Flag was the symbolic effect of showing the Union's power to the world by defeating the Gundams with a Union Flag-type mobile suit.[7] Additionally, the construction of this machine allowed the Union engineering team to learn more about the circulation of GN Particles within a mobile suit, the required strength settings for the various body parts, etc.[8] Later, the data of the GN Flag was used in the development of the GNX-704T/AC Ahead Sakigake and a successor unit was created in the form of the GNX-U02X Masurao.[16][17][18]

Like the Graham's Custom Flag, the GN Flag has a 20mm machine gun.[3] Located on the left side of its abdomen, this physical projectile weapon lacks firepower, but it can be rapid-fired and is mostly for restricting enemy movements in mobile suit combat.

The GN Flag has two defense rods mounted on the sides of the legs and they uses rotary motions to deflect/ricochet incoming enemy projectiles.[3][4][5][12] These defense rods are small in size so as not to interfere with the GN Flag's movements.[11] Additionally, they also serve as sub-thrusters.[3][4][5][12]

A protective barrier made of GN Particles, the GN Field is generated via the GN Field generators mounted on the tip of the elbows.[12] However, as the generators were hastily constructed, their stability is unknown.[12]

Graham Aker and his SVMS-01X Union Flag Custom II (aka GN Flag) entered the battlefield just as the GN-001 Gundam Exia, the Celestial Being's Ptolemy Team's last standing mobile suit, had exhausted its Trans-Am system defeating the United Nation Forces' GNMS-XCVII Alvaaron. As the GN Flag locked blades with Exia, Graham hailed the enemy pilot and claimed that he would avenge Howard Mason and Daryl Dodge with his mobile suit. The GN Flag then pushed the Exia back and sliced off its left arm. With the GN Flag's follow up strike being blocked, Graham said that his 'love' for the Gundams' overwhelming power had morphed into hatred. The Exia counterattacked, slicing off the GN Flag's right leg.

Ignoring the damage, the GN Flag charged and pierced through the Exia's right face, decapitating it in a single blow. Exia beheaded the GN Flag in retaliation. In response, the GN Flag punched and kicked the Exia, and at the same time, Graham explained that he had become twisted because of the Gundams. Exia fired several beam shots from its GN Sword, but the GN Flag evaded them. Graham then declared that he would defeat the Exia and charged at the Gundam again, calling his attack the 'voice' of the world. The two mobile suits then pierced through each other's torso. Having avenged Howard and Daryl, Graham smiled as multiple explosions occurred on both mobile suits. What happened next to the GN Flag is unknown, but the injured Graham was eventually saved.

Lineart: Back of left arm and GN Beam Saber 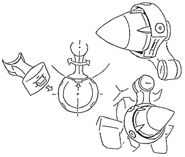 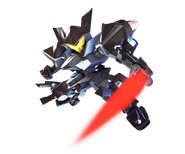 Robot Damashii figure
Add a photo to this gallery

Retrieved from "https://gundam.fandom.com/wiki/SVMS-01X_Union_Flag_Custom_II?oldid=450581"
Community content is available under CC-BY-SA unless otherwise noted.