A variant of the SVMS-01 Union Flag (aka Flag), the Union Flag Ground Package Shell Type is one of the land combat types known as Ground Package.[1][2][3][4] Commonly called "Shell Flag", its design omitted the regular Flag's back-mounted flight units for extra armor placed all over its body.[1][2][3][5] The extra armor functions like ablative armor, absorbing heat from the enemy's attack and through the resulting vaporization of the armor itself, reduces damage to the mobile suit.[1][2] While the Shell Flag retains the regular Flag's waist-mounted sub flight units, it cannot fly and can only hover over the ground for several tens of seconds.[1][2]

Besides the extra armor, the Shell Flag's defensive capabilities are also enhanced through the use of the large defense rod.[4][6][7] In terms of offensive capabilities, the Shell Flag has higher firepower with the addition of the 200mm linear cannon and a pair of rocket launchers.[6][7][8] It also wields a handheld 120mm linear machine gun instead of the regular Flag's 120mm linear rifle.[1][2] The motors in Shell Flag's knees and ankles are enlarged to better adapt to ground combat.[1][2] As the Shell Flag's armor surfaces have nano machines-based color modulation camouflage coating, its colors as well as camouflage patterns can be altered through the nano machines' programming.[1][2]

This mobile suit is a good example of the Flag's ability to adapt to various terrains via switching its parts and equipment.[1][2] However, doing so in practice also requires various minor adjustments, thus there is a propensity for ground combat specialized unit to remain as it is once configured.[1][2] Known deployments of the Shell Flag include during the three blocs' joint military exercise in the Taklamakan Desert and a small number of units stationed at Japan's Okinawa Base.[2][3][4][9] There also exist a light armor variant of the Shell Flag with a slightly different set of extra armor and weaponry.[6]

The Shell Flag retains the 20mm machine gun of the regular Union Flag.[1] Located on the left side of its abdomen, this physical projectile weapon lacks firepower, but can be rapid-fired and has high utility value. It is used for intercepting missiles, anti-vehicles, anti-personal and other cases where heavy firepower is unnecessary. In mobile suit combat, it is mostly for restricting enemy movements.

A pair of rocket launchers are located on the Shell Flag's back in place of the regular Union Flag's back-mounted flight units.[1][2] Each launcher carries 4 rockets.[1][2]

The same knife-like melee weapon as used by the regular Union Flag, it has a blade made of super-hard carbon that flips out of the handle during use.[1][2] The blade can vibrate at a high frequency for high cutting capabilities. Additionally, by focusing plasma into an elongated blade shape around the physical blade, the weapon can be utilized as a plasma sword.[1][2] The plasma sword's length varies according to its output. It can last for 3 minutes at full power. [1][2] The Sonic Blade (Plasma Sword) is stored in the forearms when not in use.[1][2]

Mounted on the right side of the body, this ranged weaponry is unique to the Shell Flag and not found on other ground variants of the Flag.[1][2][3][4] The cannon has a movable grip on the right side, and its magazine as well as battery unit are located below the rocket launchers.[1][2][7]

A handheld firearm, it has a short barrel to adapt to operations in subtropical climate.[1][2] Made by itsubishi Inc., the bottom of the gun stores 4 grenades.[1][2]

Like the regular Union Flag, the Shell Flag can store a missile in each leg's shin region.[1][2] When firing these missiles, the extra armor fastened on the legs are forcibly ejected.[1][2]

Mounted above the left chest.[1][2] The chaff disrupts radar-guided weaponry, while the smoke discharged creates a smokescreen to conceal the Shell Flag from enemy's vision.

The Shell Flag can generate various luminescence patterns on the sides of its face via tiny, embedded sensor elements. These patterns are for intimidation, communications, etc.

In AD 2308, Robert Spacey was surveying the military equipment stationed in non-combat regions such as special economic zones when he visited Japan's Okinawa Base for an interview with Deborah Galiena on related topics. Deborah, a mobile suit pilot of the UN inspection team, was visiting the region to inspect the Union military forces stationed here. When Robert arrived, Deborah was already conducting an on-site inspection using one of the few Shell Flags the Union had stationed at the base.

The GN-001 Gundam Exia then suddenly appeared. Why the Exia appeared at the base was unknown, but as it quickly left, this seems to have been merely an accidental battle while it was on its way to its destination. During the fight, Deborah demonstrated her excellent piloting skills. She blocked a blow from Exia's GN Sword using the Shell Flag's Large Defense Rod and used the rod's spinning momentum to leap backwards, distancing her mobile suit from the Gundam. Although the Exia's attack sliced apart some of the Shell Flag's extra armor, Deborah survived the encounter unharmed.

The Union, Advanced European Union and Human Reform League held a joint military exercise in the Taklamakan Desert, which was in actuality a trap to capture the Celestial Being's Gundams. During the battle, several Shell Flags in desert colors and a number of MA-115HT Union Realdo Hover Tanks launched a heavy barrage at the GN-002 Gundam Dynames and GN-003 Gundam Kyrios. Together with long-range bombardment from multiple MSJ-06II-LC Tieren Long-Range Cannon Types as well as aerial bombing by groups of VMS-15 Union Realdos, they managed to pin the two Gundams down.

In AD 2309, Fon Spaak gathered several rogue mobile suit pilots from various blocs who are against the UN Forces to capture an under-defended missile base in Africa. With the base, they can launch missile attacks at any targets in Africa and it also serves as a bargaining chip to negotiate with the UN Forces. Laurel was one of the pilots and he piloted a Shell Flag.

During the operation, the group split into two teams: an aerial team lured away the 4 AEU-09 AEU Enacts and 4 SVMS-01 Union Flags guarding the base, while another ground-based team that included Laurel's Shell Flag and Fon's GNY-001F2 Gundam Astraea Type F2 assaulted the base. Unexpectedly, a GNX-607T GN-XII accompanied by one GNX-607T/BW GN-XII Cannon and one GNX-607T/AC GN-XII Sword then intercepted the ground team. This was unanticipated as the intelligence obtained prior indicated that the base had no such powerful mobile suits. Laural's Shell Flag and Fon's Astraea F2 stayed behind to battle the GN-XII team while the others headed to the base. Using the Shell Flag's Large Defense Rod, Laurel blocked a shot from the GN-XII's GN Beam Rifle and tried his best to fend off the enemy.

Eventually, a companion who infiltrated the base informed Laurel that it was a trap. The UN Forces had purposely leaked false information so that terrorists would turn their attention to the base rather than attack the Orbital Elevators. Hearing the truth, Laurel lost his will to fight, leaving his Shell Flag wide open to the GN-XII's attacks. Fortunately, Fon's Astraea F2 disabled the enemy unit in time, saving him.

In one of the desert bases belonging to the anti-Federation organization, Katharon, the pilot of a light armor variant of the Shell Flag was taking a break from his duties. This pilot had left the Union military with the mobile suit as he was disgusted by the actions of the A-Laws. 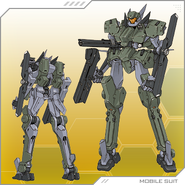 From Mobile Suit Gundam 00N integrated G-ROOMS: A sketch of Katharon forces in the desert relaxing. Note the damaged, light armor variant of the Shell Flag on the right. 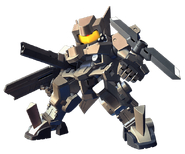