Graham Aker's Custom Flag is a modified Union Flag that has twice the speed of a standard Flag thanks to a new high-output backpack and because it is lighter, which is due to the use of lighter armor material and because the suit carries less fuel. The suit also features an acceleration mechanism called the G-System which greatly accelerates the Custom Flag. However, the G-System has a large drawback; the suit's pilot will experience up to 12Gs of acceleration making it a double edged sword weapon.[1][5] Other modifications include reinforcements to the joints, a black anti-beam coating on the unit's surface for anti-Gundam battle and a new linear rifle designed by the Iris Corporation.[5] This Custom Flag would later be the base model of the limited production SVMS-01O Over Flag, which does not have the dangerous G-System system upgrade.

When the Over Flags are introduced, Graham exchanges the trial type linear rifle for the new standard-issue model (a triple-barrelled design consisting of a 200mm main gun and two smaller 60mm guns) used by the rest of the Over Flag squadron. The suit is then known as Union Flag Graham Aker Custom (Over Flag Specification), and can only be distinguished from a normal Over Flag by the blue stripe on its rifle (compared to a white stripe on the Over Flags) and the fact that the Custom Flag carries its rifle in the left hand and mounts its defense rod on the right arm (the reverse is the case for all other Flags). Graham's Custom Flag was later upgraded to the SVMS-01X Union Flag Custom II, by using a GN Tau Drive removed from the GNX-603T GN-X assigned to him. To intimidate enemies, all Flags possess an AI that programs the visor to make an eye pattern.

The 20mm machine gun is mounted next to the drum cockpit. This rapid-fire armament is ideal for shooting down incoming missiles or small vehicles. The 20mm machine gun however is generally ineffective against heavily armored targets like mobile suits.

Graham Aker's custom Flag was originally outfitted with a trial type 200mm linear rifle that was larger and more powerful then the model used by standard Flags. When members of the Fereshte organization reviewed the data from the initial conflict between the Custom Flag and Gundam Exia they discovered that the XLR-04 Trial Type Linear Rifle has a variable power output. It is capable of firing a series of rapid-fire high speed attacks that have little power behind them, or it can charge up a single shot that has tremendous speed and power.

The Custom Flag is seen to carry a new linear rifle codenamed "Trident Striker" when it joins the Over Flags. This linear rifle is developed from the XLR-04 200mm Trial Type Linear Rifle and has three barrels instead of one. Like its predecessor, it still requires charging before shots, which hinders it from rapid firing from its main barrel. To compensate for this limitation, two smaller caliber barrels are installed to either side of the main barrel. The two smaller barrels act like vulcans that fire a rapid amount of shots used primarily to restrict enemy movements, while the main barrel shoots stronger shots. The clear part on the top of the rifle has cooling and demagnetizing properties. According to Fon Spaak, a shot from the secondary barrels doesn't have enough velocity to damage GN-001 Gundam Exia's armor.

A standard defensive feature of AEU and Union mobile suits. The defense rod is a rotating rod usually connected to the elbow joint of the mobile suits left arm. Using rotary motion, the rod is capable of deflecting certain physical rounds such as bullets from a machine gun and in some cases a shot from a beam rifle by generating a plasma field. Compared to a conventional shield, the defense rod is lighter as the Flag has to maintain its speed advantage and manoeuvrability during combat. In one instance, it managed to successfully block a few shots from Dynames' GN Handguns at close range but not without sustaining damage.[6]

The standard melee weapon of both the AEU's and Union's mobile suits. A sonic blade is a folding dagger-like weapon that incorporates a high-frequency oscillating blade. The vibrations of the oscillating blade greatly increase the weapon's cutting capabilities. It can focus plasma in a sword shape to form a plasma sword. The Union Flag can store and carry 2 of these blades. One can be used as a reserve weapon, or both can be used simultaneously in a twin sword fashion.

Depending on mission parameters, the Custom Flag can be equipped with different missiles like air-to-air missiles, air-to-surface missiles or even surface-to-air missiles. These missiles are usually stored in the shin compartment, but due to the limited storage space there, additional missile pods can be attached to the main wing, sub wing or between the legs. During the battles with the Gundam, the Custom Flag is not loaded with missiles to lighten its weight.

A melee weapon taken from the GNW-001 Gundam Throne Eins, since the GN Beam Sabers that the Thrones use have a small GN Condenser within them, the beam blade does not dissipate when it leaves the Gundams' hand.

This equipment is used to intercept missiles coming from behind the Flag when it is in flight mode. It is located at the circular ankle joints in each legs. It was rarely used against the Gundams, which used mostly beam weaponry.[7]

The drum cockpit is designed to reduce the G forces exerted on the pilot during the unit's flight. It achieves this by having the pilot sit in a lying down fashion. Overall this decreases the burden on the pilot. A sub-cockpit is located in the waist for escape purposes.[7]

These hardpoints are for mounting additional missile pods.

This AI on the Flag is used to control the patterns made by the unit's visor.[7]

Designed by Ralph Eifman in AD 2307, who also oversaw its construction. The Graham Aker Custom Flag was built using the Union's latest technology specifically as an anti-Gundam weapon, and is quite possibly the most powerful Union mobile suit built in AD 2307. This custom Flag first saw action at the battle of Taribia while pursuing the departing GN-001 Gundam Exia. With the Custom Flag's speed it was able to catch up with the Gundam. However Graham Aker was unable to determine how well his new Flag matched up to it, aside from learning that the Exia's shield was capable of defending against a round from the new linear rifle. 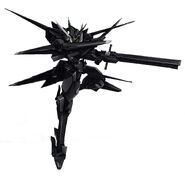 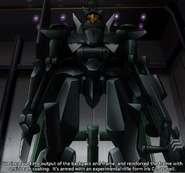 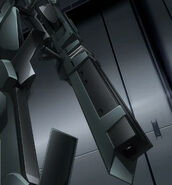 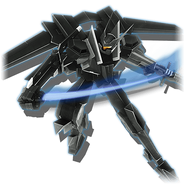 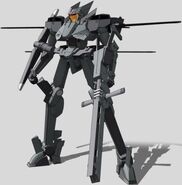 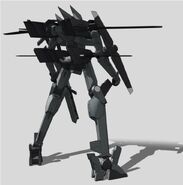 Retrieved from "https://gundam.fandom.com/wiki/SVMS-01E_Graham%27s_Union_Flag_Custom?oldid=427944"
Community content is available under CC-BY-SA unless otherwise noted.