The SVMS-01AP Union Flag Orbit Package Colony Guard Type is a variant of the SVMS-01AW Union Flag Orbit Package Astro Work Type (aka Astro Work Flag) with enhanced combat capabilities and tuned for patrolling space colonies and asteroid areas.[1][2][3] Commonly known as "Colony Guard Flag", it is produced in small numbers to handle enemy units that the Astro Work Flag, which has fewer weaponry, is too weak to deal with.[1][2][4] Like its base unit, the Colony Guard Flag primarily operates in its MA modes: the "Raptor Position" and the "Cruise Position".[1][2] The Colony Guard Flag positions its legs at the front during the Raptor Position, and this configuration is capable of melee combat.[1][2] Similar to the Astro Work Flag, the legs can serve as large arms, but the feet are modified to change into claws of a larger size.[1][2] In Cruise Position, the Colony Guard Flag's legs are fixed at the back of its body and this configuration is utilized for normal flights.[1][2]

The main weapon of the Colony Guard Flag, it is the standard version of the XLR-04 Trial Type Linear Rifle used by SVMS-01E Graham's Union Flag Custom.[1][2] Also used by the Astro Work Flag, it is handheld in MS mode and mounted in front of the chest in Raptor and Cruise Positions.[1][2]

A pair of 120mm short linear cannons are attached to the mounts on the sides of the backpack.[1][2]

A pair of linear cannons with smaller caliber than the short linear cannons, they are inherited from the Astro Work Flag.[1][2] They extend from the backpack to flank both sides of the head.[1][2]

A pair of 2-tube rocket launcher packs are attached to the mounts on the sides of the legs.[1][2]

The Colony Guard Flag carries two sonic blade (plasma sword).[1][2] This is presumably the same knife-like melee weapon as used by the regular SVMS-01 Union Flag, it has a blade made of super-hard carbon that flips out of the handle during use. The blade can vibrate at a high frequency for high cutting capabilities. Additionally, by focusing plasma into an elongated blade shape around the physical blade, the weapon can be utilized as a plasma sword. The plasma sword's length varies according to its output, and it can last for 3 minutes at full power. Stored in the forearms when not in use.

Also found on the Astro Work Flag, it is a small spike that extends out of the bottom of the circular part of each foot.[1][2]

AD 2308. Robert Spacey and Deborah Galiena were badly shaken when Alejandro Corner's personal secretary revealed that Alejandro had plans to take over the world. Previously, Robert and Deborah only knew that Alejandro was a member of the private military organization, Celestial Being, who had decided to revolt so as to achieve world peace. Upon his invitation, they assisted in the development of the GNX-603T GN-X, which was currently in the final stages. The piloting data acquired from Deborah's use of the GNX-509T Throne Varanus have been feedbacked to the GN-X's unassembled parts. The pair now feared that once they had accomplished their tasks, Alejandro would take actions against them, including murder. They then decided to flee and hide elsewhere. The secret factory used for developing the GN-X was in the Orbital Elevator, so they planned to hijack one of the MS stationed in the structure. Stealing the Throne Varanus would be too difficult, so they settled on the Colony Guard Flag used in the maintenance of the elevator. They were extremely nervous during their escape, but luckily it went extremely smoothly.

After further thoughts, it seemed that Alejandro could not catch them even if he wanted to as he had no private army. It was also possible that to him, the duo were simply not that important to warrant the effort. After escaping, Robert and Deborah headed for Union's space colonies in Lagrange 1. Under Deborah's control, the Colony Guard Flag easily and gracefully maneuvered around the asteroids in their path. Such movements were not a given even for a mobile suit specialized for space operations, and so Robert was very impressed by the versatility of the SVMS-01 Union Flag, which can operate on land, above the seas, in the air and in space. Robert then wondered what they should do once they reach their destination. Deborah briefly considered the matter and replied that she wanted to contact the mass media. She believed that information would protect them in the worst-case scenario and asked if Robert knew any one in the field. He quickly thought of Kinue Crossroad, a TV journalist who had interviewed him when he was just starting out as a mobile suit development historian (story continues in Mobile Suit Gundam 00V Vol.010).

AD 2314. The Colony Guard Flag was one of the many machines deployed by the Earth Sphere Federation Army during the conflict with the alien life forms known as the ELS. 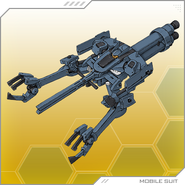 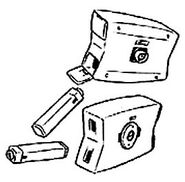 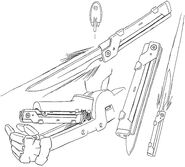