The STH-16 Shiden (獅電, STH-16 Shiden?) is a mobile suit from the second season of the Mobile Suit Gundam IRON-BLOODED ORPHANS television series.

A mass production, general purpose model developed by Teiwaz based on the technology accumulated from the development of the Hyakuri and Hyakuren.[1][2] The Shiden's Io Frame was designed from scratch, but as it shares the same design philosophy as the Hyakuri and Hyakuren's Teiwaz Frame, the two appear to be sister machines even to great technicians.[1] Although the Io frame uses Ahab Reactor from the Calamity War era that was recovered from the Debris Zone, it is still extremely valuable as it uses the latest technology in the crafting of its frame material to its design and development.[1]

As a mass produced machine, Shiden has a good balance of close and ranged combat capabilities as well as mobility, to meet the needs of pilots with varied level of skills and proficiency.[2][3] This easy to maintain machine also has high versatility, with a variety of interchangeable equipment to suit different environments or situations.[1][2][4] Its main head camera has multiple sensors, and is protected by exchangeable visor.[1][5] The suit is geared towards group rather than solo combat, thus despite being newer than the Hyakuri and Hyakuren, its individual performance is inferior to the Graze.[1][6] The strongest point about the Shiden is that it is being further developed.[1]

The standard range weapon of the Shiden, it is stored on the rear skirt armor when not in use.[1] Typically, the suit would attack using the assault rifle while protecting itself with the riot shield.[3]

Standard melee weapon for Shiden developed by the Heavy Industry Department of Teiwaz, it can be used for stabbing and assaulting opponents.[1][3] The edges of this oar-like weapon are thin as a blade, while its stock can be extended or retracted so that its attack range can meet the needs of the combat environment or situations.[1][3][4] Can be stored on the sides of the backpack or on the rear skirt armor.[4]

A small shield mounted on the forearm, its pointed tips allows it to be used as a stabbing melee weapon.[1] Also known as 'Short Shield'.[4]

A large shield that can cover half of the mobile suit, it is mainly for group battles and is effective for stronghold assault or defense and convoy protection missions.[1][6] Such a shield is rarely used by other mobile suits.[4]

A bat with two fin-like protrusion at the sides, this close range weapon has enhanced destructive power.[4][5]

The head-mounted main camera contains multiple highly sensitive sensors, it is protected by a visor.[1]

The visor protecting the Shiden's main camera can be exchanged according to the environment.[1] Different visors also have different camera views, and facilitates identification.[5]

An optional antenna can be fitted to the back of the Shiden's head.[5]

In recognition of Tekkadan's combat abilities, it was given priority deployment of the Shiden at a low cost and Lafter Frankland as well as Azee Gurumin were sent to train the organization's member in the use of the mobile suit.[2] During Tekkadan's defense of the Admoss Company's mine from the pirate group, Dawn Horizon Corps, two Shidens were deployed alongside Norba Shino's STH-16/tc Shiden Custom. The three mobile suits were able to hold off the first wave of the enemies' Garm Rodis, and took out at least two units. Just as they were about to face the second wave of enemy units, the ASW-G-08 Gundam Barbatos Lupus arrived, and forced the enemies to retreat. More Shidens were later deployed when the Tekkadan defeated the Dawn Horizon Corps in space. During the space battle, Dante Mogro was caught off guard and forced to detach his Shiden's right arm to avoid grappling in close quarters with the enemies' IPP-66305 Hugo.

During the war between SAU and Arbrau, Tekkadan Mars HQ sent reinforcements that included several Shidens and their pilots to assist the Earth branch, who were serving Arbrau. The Shidens were involved in the ambush against Galan Mossa, who was responsible for the war, and his mercenaries, overwhelming them and their older mobile suits.

When the mobile armor Hashmal awakened on Mars, the Shidens and the UGY-R41 Landman Rodis were deployed to stop it and its numerous sub-units, the Plumas. During the battle, Ride Mass' Shiden was damaged by the mobile armor's beam weapon when it tried to protect an agricultural plant, and subsequently overwhelmed by the Plumas. However, it was saved by the Gundam Barbatos Lupus. When the Hashmal was finally isolated, the Shidens and the Landman Rodis held off the Plumas, so that the Gundam Barbatos Lupus could defeat the mobile armor.

Like Tekkadan, the Turbines also received the Shidens, albeit painted in different colors. These machines were deployed to defend the retreating transport ships when Turbines came under attack from Gjallarhorn after they were framed for illegal possession of the Dainsleif railgun.

Tekkadan's Shidens were also involved in the attack on JPT Trust and later, to aid McGillis Fareed's coup forces against the Arianrhod fleet.

After losing the battle against the Arianrhod fleet, Tekkadan retreated back to Mars. The Arianrhod fleet followed and eventually sent troops to surround Tekkadan's Mars HQ. Tekkadan's remaining mobile suits, including Shidens, were then deployed to buy time as the other members escaped through a tunnel. During this battle, Eugene Sevenstark launched in Orga's custom white Shiden that has a modified single horn faceplate and a shield on its left shoulder. Though originally intended for use by Orga Itsuka, he never piloted it.

Heeding Mikazuki's advice, Eugene and the other mobile suits' pilots left Mikazuki and Akihiro to fight the enemy while they retreated back to base and escape via the tunnel. What happened to the Shidens and whether the machines survived the Dainsleif orbital barrage is unknown. 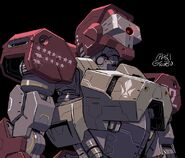