The STH-16/tc Shiden Custom is a mobile suit from the second season of the Mobile Suit Gundam IRON-BLOODED ORPHANS television series. It is first piloted by Norba Shino and later Ride Mass.

Originally a STH-16 Shiden customized for Norba Shino's use, and at his request, shoulder thrusters were added and a gauntlet is equipped as part of its standard equipment.[1] The Shiden Custom is nicknamed Ryusei-Go III by Shino, and is designed so that he can make use of its high mobility in battle.[1][2] It also has the EB-06/tc2 Ryusei-Go's battle data, and reuses some of the latter's parts including the cockpit seat.[1] Thus, it is the only Shiden with the Alaya-Vijnana System.[1]

After Shino switched to the ASW-G-64 Gundam Flauros (Ryusei-Go), his Shiden Custom was given to Ride Mass.[3] It was then painted in a yellow-gold color scheme with a blue lightning motif on the left shoulder based on Ride's preferences, who also dubs the suit as the "Riden-Go".[3][4] It also has a different visor and another gauntlet on the right forearm. The use of two gauntlets allow the suit to excel at super close combat.[1]

Standard melee weapon for Shiden developed by the Heavy Industry Department of Teiwaz, it can be used for stabbing and assaulting opponents. The edges of this oar-like weapon are thin as a blade, while its stock can be extended or retracted so that its attack range can meet the needs of the combat environment or situations. Can be stored on the sides of the backpack or on the rear skirt armor.

The standard range weapon of the Shiden, it is stored on the rear skirt armor when not in use.

A small shield mounted on the forearm, its pointed tips allows it to be used as a stabbing melee weapon. Riden-Go is equipped with two gauntlets for super close combat. Also known as 'Short Shield'.

The head-mounted main camera contains multiple highly sensitive sensors, it is protected by a visor.

The visor protecting the suit's main camera can be exchanged according to the environment. Different visors also have different camera views, and facilitates identification.

An organic device system, this old man-machine interface was developed during the Calamity War to maximize the abilities of the mobile suit. The system has two parts, one part is installed in the mobile suit, and the other part is implanted into the pilot’s spine. With this system, the pilot can connect to the mobile suit's computer and directly process mobile suit data. It also allows the pilot (even uneducated ones) to operate mobile suit for combat without reading the instruction manual. The implant in the pilot also enhances spatial awareness. The drop in technical capabilities after the Calamity War, coupled with the use of an incomplete version of the system in the Outer Sphere areas (such as Mars and Jupiter), lead to the implant surgery having a low success rate and can only be done at a young age to let the implant fuse as the pilot grow. The Ryusei-Go III's Alaya-Vijnana System originated from the Ryusei-Go, and it remains when the suit became the Riden-Go.[4]

The Ryusei-Go III was first seen on Mars as Tekkadan defended the Admoss Company's half-metal mine from an attack by the pirate group Dawn Horizon Corps. It was then sent into space to hunt the pirate group down alongside the Tekkadan's ships and other mobile suits. When the mobile armor Hashmal was awakened, Shino left the suit behind to collect his new machine, the ASW-G-64 Gundam Flauros (Ryusei-Go). The Shiden Custom was then used by Ride Mass, who had earlier lost his Shiden, to lure the Hashmal into a trap that would separate it from its Pluma sub-units. The suit was damaged during the process, but was saved by the timely arrival of Mikazuki Augus and his ASW-G-08 Gundam Barbatos Lupus. Later, the suit was transferred to Ride who customized it into the Riden-Go.

The Riden-Go was used during the Gjallarhorn's assault on the Turbines' relay base. Using boosters, it along with the Gundam Flauros (Ryusei-Go)‎ and ASW-G-11 Gundam Gusion Rebake Full City‎ quickly reach the greatly outnumbered Turbines, and took down several enemy units, assisting in the escape of non-combatants. The suit was later deployed in Tekkadan's battle against JPT Trust for its involvement in the Turbines' disbandment and the deaths of Naze Turbine, Amida Arca, and Lafter Frankland. The Riden-Go defeated several enemy units, but was eventually stopped by a UGY-R41 Man Rodi piloted by a Human Debris who also had the Alaya-Vijnana surgery. Luckily, the Gundam Gusion Rebake Full City‎ came to Ride's aid and destroyed the enemy. The Riden-Go was subsequently deployed to assist McGillis Fareed's faction against the Arianrhod Fleet, which eventually ended in defeat for both Tekkadan and McGillis' factions. In the final confrontation with the Arianrhod fleet on Mars, the suit was deployed with Embi as the pilot alongside Tekkadan's other remaining mobile suits to buy time for the organization's members to escape to Chryse. 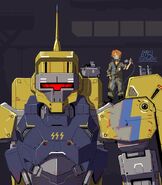 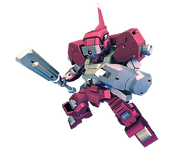