One of the mobile suits used by Teiwaz and its subsidiaries such as Turbines, Hyakuri is a high mobility machine that is used mainly for patrolling.[1][2] Like the STH-05 Hyakuren, the Hyakuri uses the Teiwaz Frame developed based on the blueprints of a high output machine designed during the late stages of the Calamity War, and has Ahab Reactor from ancient times.[3][4] Its potential is also equal to or greater than the Gjallarhorn's EB-06 Graze.[5]

Teiwaz based its operation in the Outer Sphere, and uses the asteroid belt and debris zone as part of the travelling route to the Earth Sphere. Besides poor visibility in these two areas, the Ahab Waves are also unstable in the debris zone as there are many operating Ahab Reactors in the remains of mobile suits and ships that have collected there after the Calamity War. Thus, a MS with excellent search capabilities and unassisted long distance flight ability is required.[1][2] The Hyakuri is hence equipped with a protruding backpack that serves as a large booster unit as well as a weapons rack, and also contained a large sensor for detecting Ahab Waves.[1][4] However, the unique backpack structure caused it to have terrible weight balance, and hence, it is used mainly in space.[1][2]

The Hyakuri also has an alternate flight form where it tucks its arms into the sides of its backpack, tilts its lower body slightly backwards and folds its feet down. This form is used for conducting patrols and for long-range travel.[6] The arms are concealed to protect them from being damaged during collision with debris, etc.[6]

Due to Hyakuri's high thrust, it excels at hit and run attacks, and is a threat to enemy ships as it can easily evade anti-air attacks.[1] The usual practice is to deploy a single Hyakuri for reconnaissance mission, however, the Turbines usually deploy two Hyakurens to accompany the lone Hyakuri.[1] The machine can serve a wide range of roles including logistical support; its backpack can be filled with weapons and ammunitions for supplying the front lines.[1][2] Besides the standard equipment configuration, there are two other variations of the Hyakuri, an intelligence support type specializing in reconnaissance and search, and a fire support type where the backpack is loaded with heavy equipment. The former is mostly used during interplanetary travel, while the latter is usually used for base defense.[1][2]

Hyakuri is equipped with a pair of foldable rifles as its standard ranged weaponry.[2] They are folded and stored on the sides of the backpack, and can be used that way while in flight form. When deployed In mobile suit form, they are held in hands. The rifles are more destructive than the Hyakuren's 100mm Rifle Cannon due to their higher caliber.[4] Manufactured by one of Teiwaz's subsidiaries, Euro Electronics, which is engaged in heavy industries.[2]

An optional weapon, it fires explosive shells and holds 8 rounds.[7][4] The revolving grenade launcher has a foldable sub-grip below the barrel, and its rear cover opens during firing to vent out gases.[6] It can be mounted on the backpack when not in use.[7]

An optional weapon, it is a relatively light weight rocket launcher.[7] Depending on the objective, the rocket launcher can be loaded with different warheads such as explosive shell, smoke shell, napalm shell, etc.[7]

Hyakuri with knuckle shield and rifle

One of the JPT Trust Hyakuri pilots in Settlement.

One of the JPT Trust Hyakuri pilots in Settlement. 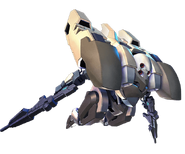