A customized version of the Teiwaz's STH-14s Hyakuri used by Tanto Tempo's executive Gianmarco Salerno, it is designed for high speed, flexible battle and has large thrusters on its back and shoulders. Although its head armor is vastly different from the original, Kallisto still uses the same type of sensor as Hyakuri. The suit's main melee weapon is the pair of Variable Blade Shields on its forearms. They are difficult to reproduce with current technology and are originally a part of the ASW-G-29 Gundam Astaroth Origin's shoulder armor. For ranged weaponry, the Kallisto can use a four-barreled rocket launcher.

Obtained by Gianmarco Salerno, they are originally a part of the ASW-G-29 Gundam Astaroth Origin's shoulder armor. But due to their overwhelming toughness, they are equipped onto Kallisto's forearms as the Variable Blade Shields. They are difficult to reproduce with current technology.

An optional weapon, it is a relatively light weight rocket launcher. Depending on the objective, the rocket launcher can be loaded with different warheads such as explosive shell, smoke shell, napalm shell, etc.

The Kallisto was deployed to capture Liarina Morugaton from the Under 3 colony, but was defeated by Argi Mirage in the ASW-G-29 Gundam Astaroth, with both its forearms and the attached Variable Blade Shields being ripped off. 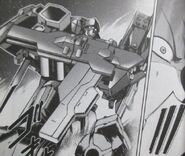 Retrieved from "https://gundam.fandom.com/wiki/STH-14/T2C_Kallisto?oldid=454182"
Community content is available under CC-BY-SA unless otherwise noted.