The Rouei was originally conceived as alternate equipment set for the STH-05 Hyakuren.[1] Teiwaz’s Development Department promoted trial production of the suit, and its first deployment in live combat came when Tekkadan first descended to Earth and Naze Turbine sent out two Rouei to provide support.[1] These two units were converted from Turbine’s Hyakurens, including the STH-05/AC Amida's Hyakuren, with the resulting Rouei piloted by Lafter Frankland.[2] This conversion avoided implicating Teiwaz as Hyakuren is often seen as the group's symbol.[3] The two Rouei ended up leaving remarkable ground combat data. Based on that data, the Rouei, which had achieved lighter armor than the Hyakuren, was later officially adopted as a mass production, high mobility machine.[1]

Besides high mobility, the Rouei also excel in combat under gravity, this is in contrast to the Hyakuren which shares the same frame structure but has excellent durability and endurance in prolonged combat[1] The Rouei can also operate in space without any issues.[3] The large boosters on its back maintain mobility under gravity, and its legs contain boosters that provide it with superior posture control, allowing it to move quickly even during high mobility combat in space.[1] The legs also have hovering function for use under gravity.[4]

Also known as Short Rifle, it has a small caliber but offers high power.[1] It is designed for single-handed use, allowing a close combat weapon to be held in the other.[1] The Handgun has a system that prevents the ejection of the bullet cases so they can't be traced to Teiwaz, thus preserving the Rouei’s undercover identity. Uses the same double-column type magazine as the JEE-205 130mm Assault Rifle, and additional magazines can be mounted in an optional skirt mounted magazine holder.

A large club developed for Rouei’s use, it has high destructive power.[1] The club’s interior (excluding the handle) is hollow and contains a free heavy weight that uses the centrifugal force of an attack to move to the top part of the club, maximizing damage. The weapon's handle is retracted when it is stored on the rear skirt armor.[1]

The same model of assault rifle as used by the Amida's Hyakuren, it has a larger caliber than the Hyakuren's rifle cannon. Its accuracy, single shot power and effective range is a revision of the rifle cannon's. The rifle can be stored on the rear skirt armor.

The same model of grenade launcher as used by the Amida's Hyakuren, it fires explosive shells.

The pair of large boosters on the back are movable and can be opened and closed.[1] They help to maintain high mobility even under gravity.[1]

Wanting to support the Tekkadan as they continue with their mission on Earth, Turbines disguised their two Hyakurens as the Roueis so that Teiwaz's involvement in the conflict remains a secret. The two mobile suits were piloted by Lafter and Azee upon Naze Turbine's request, and a third member of the Turbines, Eco Turbine also followed the duo to help with mobile suit maintenance. The two machines made their debut when assisting Tekkadan against Gjallarhorn forces during the Earth atmospheric entry battle. Later, they were involved in the battle of Millennium Island against the Gjallarhorn's naval ships and Graze Ground Types. When the Tekkadan arrived at Edmonton, the two Roueis alongside the Tekkadan's mobile suits protected the rear as the other members of the group tried to enter the city that is heavily guarded by Gjallarhorn. The two machines were later severely damaged by the newly arrived EB-AX2 Graze Ein. 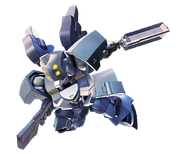