The Amida's Hyakuren is one of the 9 initial Hyakuren to be built by Teiwaz.[1] These 9 machines are known as 'Single Number', and were gifted in the name of Teiwaz's representative, McMurdo Barriston, to 9 subsidiaries directly belonging to the organization.[1] Turbines is one of the subsidiaries that received the machine, which was then assigned to Amida by Naze Turbine and painted in its distinctive color scheme.[1]

The 'Single Number' machines differ from later Hyakuren in that high purity Jupiter Metal are used as shock absorbers for the Ahab reactor and as electrical conductors in the MS' frame.[1] Also, these machines' reaction speed and maximum output are superior to that of the later machines.[1][2] Other than this differences, the 'Single Number' machines are the same as the later machines.[1] They are versatile machines that are unhindered by the operating environment, and used weapons that are designed to strike a balance between ranged and close combat. They are equipped with heavy armor as they operate primarily in the asteroid belt and debris zone. The heavier weight made the suit more resistance to collision in these areas, and by using this characteristic in MS battle, it gains strong performance in close combat. When the suit is deployed under gravity, the heavy armor would be switched out for ground combat equipment with lighter armor.[1]

A lightweight rifle made by Euro Electronics, a subsidiary of Teiwaz that is engaged in heavy industries. The rifle has a sliding stock structure and its magazine holds 20 rounds.[3][4]Spare magazines can be stored in the suit's side skirt armor.[4]

A close combat-use blade made for Hyakuren's use, it is stored in a sheath mounted on the rear skirt armor. The sheath can also be mounted on Hyakuri's backpack.[3]

Stored on the bottom of the side skirt armor, the pair of knuckle guards are hand held when in use. The close combat-use knuckle guards can deliver an electric shock when they come into contact with the enemy.[5]

An optional weapon, it is a relatively light weight rocket launcher. Depending on the objective, the rocket launcher can be loaded with different warheads such as explosive shell, smoke shell, napalm shell, etc.[6]

A standard Hyakuren weapon developed with a larger caliber than the rifle cannon. Its accuracy, single shot power and effective range is a revision of the rifle cannon's.[1]

An optional weapon, it fires explosive shells and holds 8 rounds.[6][4] The revolving grenade launcher has a foldable sub-grip below the barrel, and its rear cover opens during firing to vent out gases.[2]

Amida's Hyakuren was first seen deployed alongside a standard Hyakuren and a Hyakuri in the brief skirmish between Turbines and Tekkadan. After the ASW-G-08 Gundam Barbatos left to pursued the more agile Hyakuri, both Hyakurens were held off by the EB-06/tc Graze Custom, but they managed to gain the upper hand just before both sides were ordered to stand down.

The suit was subsequently deployed during the ambush against the Brewers and help to deal with the enemy mobile suits, allowing the Graze Custom's pilot, Akihiro Altland to find his brother who was working for Brewers. It later retreated to defend the Hammerhead until the battle's conclusion.

After the Hammerhead left the Dort Colonies, Amida's Hyakuren was modified into one of the two STH-05R Roueis to assist the Tekkadan. Although the Rouei was heavily damaged on Earth, it was recovered and restored back to the Amida's Hyakuren.

When the Turbines were framed for illegal possession of the Dainsleif railgun and came under Gjallarhorn's assault, the Amida's Hyakuren launched to defend the Hammerhead as Naze intended to surrender. It was directed to assist the retreating Turbines' ships when they came under attack, but was stopped by the EB-08jjc Reginlaze Julia. Despite the Reginlaze Julia being a newer machine, the Amida's Hyakuren was able to hold its ground. It eventually break away to attack the enemy fleet, receiving heavy damage from a Dainsleif volley in the process. Despite this, the suit was able to fire one last shot that nearly destroyed the bridge of Iok's flagship before being destroyed in a bombardment. The remains of the mobile suit was recovered by Gjallarhorn. 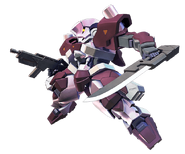