Special Response Team-Unit 1 (or SRT-Unit 1) was an experimental mobile suit unit of the Earth Federation Forces during the One Year War. It served as the player team for the Federation story in Mobile Suit Gundam: MS Sensen 0079.

On September 26th, Allain Aylward, having passed the qualification test for mobile suit pilots and graduated from the military academy, was assigned to the unit.

Unit 1 received its first mission on October 6th, the same day as Garma Zabi's funeral broadcast. Ironically, the location of this mission was the ruins of Seattle, exactly where Garma died. Though the area was of low strategic value, it was noted to be close to the California Base, so the team was ordered to conduct recon on the ruins in addition to mobile suit data collection.

While in Seattle, the team encountered multiple MS-06J Zaku II Ground Type, including three Zakus dropped by a passing Gaw. However, since Zeon was mostly still unaware that the Federation now possessed mobile suits, they were caught off guard and easily destroyed.

Their next mission was in the Gobi Desert, where they were asked to demonstrate the effectiveness of mobile suits and the experience of the team by assaulting a small Zeon mobile unit, in preparation for Operation Odessa. 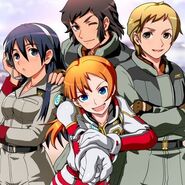 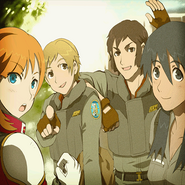 On MS Sensen 0079 manual cover
Add a photo to this gallery
Retrieved from "https://gundam.fandom.com/wiki/SRT-Unit_1?oldid=459737"
Community content is available under CC-BY-SA unless otherwise noted.