Following the same formula as its predecessors, Dragon Knight loosely derives its settings and characters from the the King Arthur mythos.

Through the efforts of the heroes, the world escaped the threat of collapse due to the Dark Mask and peace was restored. All the heroes then returned to their respective homes. A few years later...

Throughout Knight World, disturbing rumors have begun to spread, saying that a group calling itself the "Z Clan" is building its strength and scheming to overthrow King Arthur's reign. Arthur Gundam Mk-III, the ruler of Knight World, orders his young nephew Knight Strike Gundam to investigate. To seek the facts behind the rumors, Knight Strike Gundam leaves Castle Camelot and sets out on a journey. 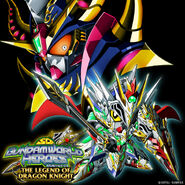