1
SD Gundam Musha Generation (SDガンダム ムシャジェネレーション ?) is the twelfth work of the Musha Gundam series. The Comic Bom Bom version is of the same title. The comic is the last Musha Gundam work by Masahiro Kanda. Running period, 2000.

Different from the other works, the musha gundams appear as giant robot in this work. This work is announced when the popularity of the SD Gundam G Generation game series is at its peak. Thus Musha Generation took on the concept as a Musha version of G Generation. But the work suffered because of its difference from the previous works and it ended in half a year. The ending suggest connection to the SD Sengokuden timeline.

The plotline is based on that of Turn A Gundam. In an alternate reality, humans began excavating giant mechanical mushas.

For this work the katakana is used in place of the usual ateji for the machine names. The BB Senshi for this work uses the same mold with its G Generation counterpart but with extra musha style decorations and usage of transparent plastic. Thus most of the mecha appearing strongly resemble the original designs just with the minor additions of Musha style elements. Most of the mecha who are not released as BB Senshi can be recreated by fixing parts from previous BB Senshis to non-Musha SD kits.

Earth, the peaceful land governed by Diana Hime. This peace is enforced by the White Musha Clan, a band of mushas who are users of a mysterious power called Kiryoku(輝力). But from this band of mushas rise Tohofuhai, with his evil ambition he created the Black Musha Clan. The Black Musha Clan assassinated their former comrades from the White Musha Clan, terrorized the streets with the mechanical musha they excavated, captured Diana Hime and claimed the land of Earth as their Earth Empire. Loran who survived the attack of the Black Musha Clan obtained Musha Turn A which he uses to fight the Earth Empire and to save Diana Hime. In his journey he gathered allies and together they defeat the Earth Empire and the mysterious evil mastermind Turn X.

An assassin. A person who fight on his free will and for the things that interest him. A member of the secret peacekeeping organization Blue Destiny. Joined Loran after Loran covered him from an attack.

A musha mechanic apprentice of Ranba's Village(嵐破の里). He likes mechanical mushas and dreams to have one. He later pilots the Musha Gundam Mark IV.

The first chief of the White Musha Clan. A character from before Loran's time. He was kept in cold sleep for reasons unknown. He awakened to help train Loran's Kiryoku and to help in the fight against the Empire.

The current ruler of Earth. She teleported Loran to a safe place with her Kiryoku, saving him from Tohofuhai's attack.

Heero's former comrade. He betrayed Blue Destiny and defected to the Empire with his Musha Blue Unit 2.
Appeared only in the Bom Bom version.

Loran's machine. It appeared from within the Majinzou(魔神像) as if answering Loran's plea to Diana Hime for help. It is referred to as the "White Majin"(白い魔神) by Loran. Equipped with the Armor of Moon Crystal(月水晶の鎧).
In the Comic World version it Haro resonated with the Gundam Crystal, which is passed down generations in Diana Hime's family, the shining Haro than entered Musha Turn A transforming it to Turn A Daishougun.
In the Bom Bom version, while the heavily damaged Musha Turn A is slowly transforming via Diana Hime's powers Haro entered it giving it self-consciousness. With the love of Diana Hime and the bravery of Loran, it gained the soul of a Musha becoming Musha Proto Gundam.

Heero's machine. An old model Musha but with Heero's excellent piloting abilities it does not lose to other Mushas. Equipped with the Armor of Pearl(真珠の鎧). Has a self-destruct system onboard.

Char's machine. A powerful old model with a special long range weapon - blades that can be controlled via the Kiryouku of Char (similar to funnels). Equipped with the Armor of Amber(琥珀の鎧).

Judau's machine. Was for a long time an unrepairable machine but revived by the skills of Jadau. Equipped with the Armor of Jade(翡翠の鎧).

Tohofuhai's machine. A melee specialised Musha that does not use any weapons except its bare fists. With its superior speed and power output plus Tohoufuhai's battle sense, Musha Master is a strong enemy. Equipped with the Armor of Amethyst(紫水晶の鎧).
In the Bom Bom version Turn X created an army of Musha Masters.

Sent to destroy Ranba's Village which is helping Loran to tune up and adjust the Musha Turn A.

Nimbus' machine. Looks similar to Heero's machine but its equipped with knight armor.
Appeared only in the Bom Bom version.

A sentient machine in the form of a head supported by cables. Turn X aims to rule the world and end the era of humans. He appeared in the final battle with an army of Master Gundams.
In the Comic World version it is referred as "Emperor", a giant electronic brain left by an ancient civilization.

The new form of Musha Turn A when it gained self-consciousness in the final battle. He is believed to be a direct ancestor of Musha Gundam from SD Sengokuden Musha Shichinin Shuu Hen.

A super power somewhat similar to The Force (Star Wars).

A mobile weapon made with super technology that is not of this time. Usually not excavated in its complete form, completed with new armor and weapons.

The tranparent armor which is part of a "Musha's" equipment. Light but strong, it nulifies beam weapons changing the beam into power. They each have different colours and effects. Many are named after jewels. 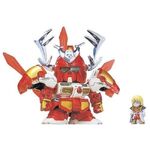 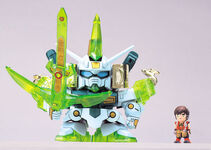 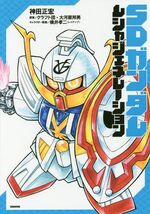