The SDV-04 Command Gundam is one of the titular Mobile Suits of the SD Gundam Franchise, specifically the SD Command Chronicles series. Unlike the Musha Gundam or the Knight Gundam, the Command Gundam is more based on the stereotypical "trigger-happy" depiction of Americans seen within many action films of the 1980s/1990s, such as Rambo. The Non-SD version is designed by Kunio Okawara and he is based on both the FA-78-1 Gundam Full Armor Type from the Mobile Suit Variations series and the actor Arnold Schwarzenegger (of the Commando film).

The Command Gundam is specially developed for rugged terrain and earth-based missions, having no fixed beam weaponry equipped to it. As it stands larger than the average mobile suit, its size dominates the battlefield as a miniaturized mobile fortress. The other unique aspect about the Command Gundam is that its built with a more powerful armor and an even sturdier frame that supports it, allowing to endure harsh situations in the battlefield.

The Command Gundam itself is also armed with a variety of weapons such as a beam machine gun, a heat knife, a 4-pod missile launcher, smoke discharger and a mega bazooka launcher. It can also be equipped with a more powerful Heavy Weapon System Armor, which doubles the overall firepower of the mobile suit.

Command Gundam first appeared in the series SD Command Chronicles. He was a mysterious Gundam who suddenly appeared in order to round-up several lazy Gundams and train them to fight against the Zatarion Empire as the combat team G-Arms. After becoming injured in a battle, he stepped down from commander position of the G-Arms team and entrusted it to CAPG-78 Captain Gundam. Despite this, he still had a big role in the battle against Zatarion Empire. As it turns out, he was the Gundam that fought against ZAFU-13 Führer Zatarion before both of them crashed and became trapped in the Magellan Continent centuries ago.

Despite his tough attitude, he is actually afraid of cats.

He also appeared in Episode 0 of Shin SD Gundam Gaiden: Knight Gundam Monogatari as Barbarian Knight Conan Gundam (蛮騎士コナンガンダム) and was a member of King Gundam I's Knights of the Round Table. He's also one of the three heroes summoned to fight against the force of Space Overlord in Musha Knight Command SD Gundam Scramble short.

Some information regarding the Command Gundam can also be found on Aila Jyrkiäinen's page.

A "non-deformed" Gunpla variant appearing in Gundam Build Fighters Honoo, built and pilot by YU. Its design base is a 1/48 Mega Size Gundam Age-1 Normal.

The evolution of Command Gundam 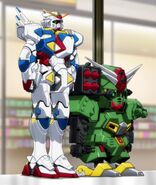 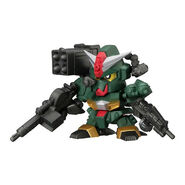