The SD-237 Winning Gundam is a Gunpla from Gundam Build Fighters Try, built and piloted by Fumina Hoshino.

An original SD Gundam created by Fumina after she was inspired by the SD Gundam battle between Sekai Kamiki and Minato Sakai, the Winning Gundam is a medium range MS that can also function as a support unit. The Winning Gundam is equipped with a pair of vulcan guns, a beam machine gun, and a radome shield that can function as a handheld buzz saw. It has less firepower compared to Fumina's previous Gunpla, the RGM-237C Powered GM Cardigan, but can transform from its SD Gundam mode into a Core Booster mode after reorganizing some of its parts. The Core Booster mode grants the unit higher speed as well as flight capability. During battle, the Winning Gundam provides support via its unique ability of separating into various power-up parts that can be equipped onto the BG-011B Build Burning Gundam and LGZ-91 Lightning Gundam. This is known as the 'Winning Road' and when in use, the Winning Gundam's remaining head will transform into a Core Fighter that is capable of fighting on its own.

Formed through the attachment of the suit's V-fin to the top of the beam machine gun, the beam bow gun functions like a crossbow and fires arrow-shaped beams.

A beam saber can be emitted from the beam machine gun's barrel for close combat.

Mounted on the left shoulder, the radome shield is the unit's main defensive equipment. As its name implies, it can also function as a radome for data collection and this is primarily used when in Core Booster mode. The shield can also be used for offensive purposes as it contains a buzz saw. In Core Booster mode, the shield is mounted underneath the main body.

A circular saw hidden underneath the radome shield, it spins at a high speed for excellent cutting capability. To use the buzz saw, the shield has to be held in hand.

Mounted on either side of the mohawk camera, the pair of vulcan guns are facing the sky and are the main weapons of Winning Gundam's Core Fighter. These shell firing weapons have a high-rate as well as lots of ammunition, and can easily destroy an enemy unit. 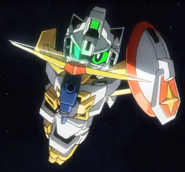