The SCVA-76 Nahel Argama (ネェル・アーガマ, Ne~eru Āgama?) is a carrier/assault landing ship introduced in Mobile Suit Gundam ZZ, the Nahel Argama is constructed to take the place of the badly damaged Argama which was left by the Anti Earth Union Group on the earth's surface to be used by their partner organization Karaba. The ship is refit and later placed under Londo Bell.

Interestingly, many video game fan translations and earlier listings named the Nahel Argama as the Near Argama.

﻿Developed along similar principals as the Argama-class, the Nahel Argama is a battleship that focuses on supporting mobile suits both in and out of battle. Originally the Nahel Argama possessed 3 hangers, 5 catapults, and one recovery deck (compared to the Argama which only had one hanger and two catapults) but after receiving a number of upgrades the number of hangers was increased to five.

Besides its MS battle supporting ability, the Nahel Argama also has strong anti-ship weaponry thanks to its large number of main gun turrets. The Nahel Argama also possesses one of the strongest ship-based weapons, the Hyper Mega Particle Cannon, which was field tested on the Argama before being perfected and installed on the Nahel Argama. Placed under the primary catapult this weapon is not commonly used in normal battle due to its lengthy charge build-up, but because of its immense power and range (which extends beyond conventional sensors) it can play a large role in the right situation. In U.C. 0096 the Nahel Argama would also possess a Mega Bazooka Launcher, however instead of being carried by a Mobile Suit into battle, the Mega Bazooka Launcher would be connected via a power cable to the main cannons power supply, allowing it to act as a makeshift turret.

The main ship-to-ship weapons of the Nahel Argama are four 2-Barrel high-energy beam cannons situated on the dorsal hull forward and aft of the bridge and on the ventral hull beneath the Hyper Mega Particle Cannon and the Minovsky-Ionesco fusion reactor. These guns provide full covering fire in most directions due to their large degree that they can rotate and elevate the guns and are a major part of defending the ship given its mass and lack of maneuverability.

Mounted on the outboard tips of the port and starboard mobile suit catapults, these beam cannons are oriented to provide forward fire only. While they have a limited firing arc, these guns are most often used for frontal attacks.

Situated inside the yellow and blue "shield" sections on the sides of the outboard mobile suit hangars, the Mega Particle Cannons deploy through opening doors and are capable of 360-degree rotation but with limited ability to elevate.

Following its refit the Nahel Argama is equipped with 3 VLS cells on its main body, aft of the superstructure and both lateral catapults. Each cell consists of 24 individual missile launch tubes, grouped in four rows of six tubes.

Dotting the surfaced of the ship are 28 two-barrel defensive machine gun emplacements. These weapons play a large role in defending the ship from incoming mobile suits and fighters and can put forth fire at an extremely high rate. Despite this, skilled mobile suit pilots are more than capable of dodging these guns' fire as the ship's tracking radar cannot keep up with extremely high-speed targets.

The Nahel Argama was constructed during the First Neo Zeon War for the Anti-Earth Union Group (AEUG). Unlike the Argama-class, this ship had significantly heavier armaments and could carry more mobile suits than the Argama. The Nahel Argama saw its first action in space when the Neo Zeon ship Endra attacked the La Vie en Rose while the Nahel Argama was docked with it. The Nahel Argama launched from the La Vie en Rose when the attack was still in the beginning and when the Neo Zeon mobile suit force from the Endra ran out of missiles they withdrew from the battle. With Beecha Oleg serving as captain, the Nahel Argama makes stops at the Tigerbaum colony picking up an incognito Haman on its way to Core 3. The Nahel Argama, as the only representative of the AEUG, was caught in the crossfire of Glemy Toto's rebellion against Haman's Neo Zeon forces. Eventually the rebellon ended with the deaths of Haman and Glemy.

Within the 5 year gap between the First and Second Neo Zeon movements, it is presumed that the AEUG leadership decided to rejoin the Earth Federation. During this time, Char Aznable, returning after a seven year absence, declares war on the Earth Federation. The Federation task force known as Londo Bell is assigned to stop this rebellion. Interestingly, the Nahel Argama is not seen in this renewed movement

Three years after the Second Neo Zeon movement, the Nahel Argama is assigned to the Londo Bell task force and is now captained by Otto Mitas. The ship's rear engines had been modified to resemble those of the Ra Cailum and hull has been extensively upgraded, now classifying it as an assault landing ship. Due to its poor maneuverability and low hull compatibility due to it being a unique vessel, the Nahel Argama mainly operates alone under covert operations. It is assigned to intercept the Neo Zeon remnants known as "The Sleeves" at the Industrial 7 space colony. After a battle erupts in and outside the colony, the ship launches its remaining RGZ-95 ReZEL units to prevent the opening of "Laplace's Box". After most of the Nahel Argama's mobile suits are destroyed by the NZ-666 Kshatriya, it received support from the ECOAS special forces unit and the RX-0 Unicorn Gundam which single handedly drove the Kshatriya back. Upon retrieval of the RX-0, the Nahel Argama fell back to a nearby colony remnant debris field to analyze the systems of the RX-0 and determine its next move. While planning their next destination, the Nahel Argama came under attack by the Rewloola and Full Frontal in his MSN-06S Sinanju. Realizing that the mobile suits of the Nahel Argama are outmatched, Banagher Links sorties in the RX-0 in an attempt to destroy the Sinanju. During this battle, the Sinanju is backed up by the Kshatriya and the RX-0 is disabled due to the incapacitation of Banagher, leaving the RX-0 in the hands of Neo Zeon.

After the retreat of the Neo Zeon forces in possession of the RX-0, the Nahel Argama is resupplied by the Earth Federation Forces Supply Corps and receives reinforcements in the form of four additional RGM-89D Jegans, one modified RGM-89S Stark Jegan, and the MSN-001A1 Delta Plus. Once the asteroid mining facility of Palau had been determined to be the location of the escaped Neo Zeon forces, the Nahel Argama heads out to conduct a hostage rescue operation in order to free Banagher and re-acquire the RX-0 Unicorn Gundam.

After firing its Hyper Mega Particle Cannon at Palau so as to not damage the residential blocks, the Nahel Argama deploys its MS contingent to intercept Palau's suits. While the mission to recover the Unicorn was successful, along with the capture of the Kshatriya, it came at the cost of the Delta Plus (which had escaped to Earth with its pilot and Mineva Lao Zabi) as well as two D-50C Loto units. 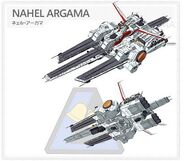 Retrieved from "https://gundam.fandom.com/wiki/SCVA-76_Nahel_Argama?oldid=380667"
Community content is available under CC-BY-SA unless otherwise noted.