Unlike the White Base, the Thoroughbred was designed for secret operations. As such, it was equipped with specialized warheads that could deploy anti-laser chaff, creating jamming fields which render laser communications unusable, as well as mechanisms that could quickly disperse Minovsky particles through a wide area. Its blue-gray color was also intended to lower its visibility in space.

The Thoroughbred first saw service when it was launched from Jaburo in November of UC 0079. Assigned to the 16th Autonomous Corps it was launched as one of 4 decoy ships in order to guard the rear of the Earth Federation Forces main fleet. To accomplish this, the Thoroughbred was given two Gundams piloted by ace pilots Ford Romfellow and veteran Luce Cassel. Once in space the Thoroughbred was asked to intercept a Zeon supply route behind the Moon that leads to Space Fortress Solomon in preparation for "Operation Star One".

Throughout much of the rest of the war the ship spent its time attacking Zeon supply ships and reinforcements. After the Battle of A Baoa Qu in UC 0080 the Thoroughbred was used to escort Zeon minister Darcia Bakharov to Granada in order to hold the final peace negotiations aimed at ending the war. Although the ship was attacked by Principality of Zeon forces who were unwilling to let the war end, the Thoroughbred was able to hold it's ground and reach Granada safely. 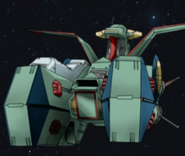 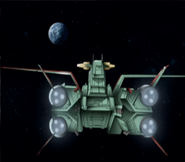 Retrieved from "https://gundam.fandom.com/wiki/SCVA-72_Thoroughbred?oldid=458379"
Community content is available under CC-BY-SA unless otherwise noted.