The SCV-70 (LMSD-71) White Base is a Pegasus-class mobile suit carrier deployed by the Earth Federation. Through the first part of One Year War, the White Base's registration name was unknown to the Principality of Zeon forces, who referred to it by the codename Trojan Horse (木馬, Mokuba?, "wooden horse"), presumably because of its unusual equine shape. After the war, it was re-designated with the model number MSC-02 even though the ship itself was destroyed at A Baoa Qu.

Pegasus-class ships featured a modular design that divided the ship into seven blocks including the bridge, living quarters, central bow hangar, engine room, and stern landing port. The rotating living quarters featured artificial gravity and and an open deck that ran from bow to stern. While primarily relying on its main engines for propulsion, the White Base could use its Minovsky Craft System to fly at low altitudes or ascend through the atmosphere without consuming a large amount of fuel. As a result, the White Base is able to escape and re-enter the atmosphere without the need for supplemental boosters like the Salamis-class and Magellan-class.

For ship-to-ship combat, the White Base is armed with a two-barrel main gun, two twin mega particle guns, eighteen anti-aircraft turrets, and numerous missile launchers. Because all of the White Base's turrets are retractable, it is possible for the ship to be disguised as a civilian vessel. However, the White Base's true means of defense was the complement of mobile suits it carried, which made the ship a formidable opponent.

The White Base's main and most powerful armament was a 580mm two-barrel cannon mounted on a retractable turret just in front of the bridge. This gun originally fired shells, but it was later modified to fire beams after being upgraded at Jaburo in order to be effective in space.

The White Base mounted two retractable twin mega particle cannons in the circular "shields" towards the middle of the ship. The original cannons had two barrels side by side. After the ship was retrofitted at Jaburo, the the two barrels were positioned one on top of the other. The turrets could rotate in a 180-degree arc from directly forward to directly behind.

Eight 3-tube missile launchers are mounted at the front of the White Base, with a pair on each side of the two arm-like struts.

White Base is equipped with rear facing 4-tube missile launchers for fending off pursuing ships or mobile suits.

Eighteen retractable twin anti-aircraft turrets are mounted across the hull of the White Base to defend against enemy fighters and mobile suits. There are six open turrets surrounding the bridge module, six more around the middle of the ship, and two on each of the ventral hulls of the engine modules in pressurized ball turrets.

The first Pegasus-class ship to enter service was the White Base; launched in September UC 0079, the White Base was immediately sent to retrieve the Federation's mobile suits at Side 7 for field-testing. In the middle of this mission, the ship unexpectedly found herself in the middle of a battle with a Zeon special forces unit led by Char Aznable, which resulted in heavy casualties among both the colony's civilian population and Federation personnel. In the middle of the battle, civilians and the surviving crew aboard White Base repulsed the Zeon attack, and managed to get the White Base underway.

She first landed at Luna II, home of the remaining Earth Federal Space Force ships, where she was promptly seized by the base commander, who proceeded to interrogate the crew, militia, and civilian survivors on board. In the middle of this interrogation, Char attacked Luna II, searching for the White Base. White Base managed to escape from Luna II, and sailed next for Earth. Upon making contact with the Federation's Earth Forces under the command of General Revil, the White Base was drawn into a battle in the ruins of Seattle, in which they shot down a Gaw containing Garma Zabi (who was maneuvered into attacking the White Base by Char).

The White Base arrived and docked at Jaburo, the Federation's main base and mobile suit manufacturing facility located underground in South America; Unfortunately, they ended up leading Char's Mad Angler unit to Jaburo, at which point he attempted an infiltration, which was repulsed. Following the failed Zeon raid on Jaburo the White Base was re-launched into space, re-designated the 13th Autonomous Corps, and sent to Side 6 in a diversionary move aimed at drawing off Zeon forces from Solomon. After eliminating the Conscon Fleet, the White Base rendezvoused with the remaining ships in the Space force, and participated in the Battle of Solomon and in the Battle of A Baoa Qu.

During the Battle of A Baoa Qu White Base became a rally point for the surviving ships in Admiral Revil's fleet after Gihren Zabi unleashed the Solar Ray, a gigantic colony laser. Assisted by other ships, White Base spearheaded an assault against one of A Baoa Qu's Defensive lines. During the battle, White Base was rammed into the asteroid in an effort to force a way inside. Unfortunately, this grounded the White Base, and she was set to self-destruct during the battle, though the crew evacuates in shuttles.

During the Third Neo Zeon War, Banagher Links and Full Frontal were able to travel across space and time using the Neo Zeong's psycho shard. As they time travel through the One Year War, one of the events they witnessed was the destruction SCV-70 White Base inside the space fortress A Baoa Qu.

In the Mobile Suit Gundam novel trilogy, the White Base and Pegasus-class titles were swapped around, becoming the White Base-class Pegasus. In the novels, the Pegasus would be used briefly until a fight in Texas Colony would ground the Pegasus, forcing the crew to evacuate. They would get the replacement Pegasus II soon after, the ship staying in service until the end of the One Year War. 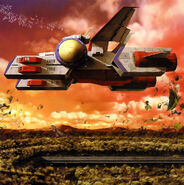 White Base in Journey to Jaburo

Gundams and White Base 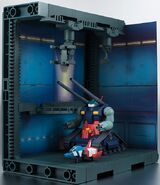 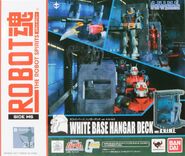 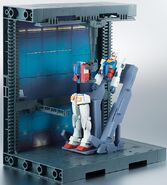 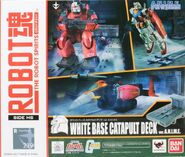 Cutaway showing several sections of the ship and detail of components.