The SCV-102 Nelson is a light cruiser deployed by the Earth Federation Forces. It first appeared as a part of the MSV-R line.

In the Earth Federation Forces' plan to develop an MS carrier that would primarily operate the RGM-79 GM, this MS light carrier was based on the Salamis-class, and was modified to be able to carry mobile suits.

This plan was decided upon separately from Operation V, along with the decision to develop the GM, and was aimed at quickly responding to the changing forms of warfare with the appearance of mobile suits. Existing space vessels were not suitable for mobile suit operations, so the development of vessels that could accurately operate mobile suits as the main weapon in tactics was urgently needed, and dozens of development proposals were submitted, including newly built vessels. Among them, several effective and versatile development plans were adopted, and construction began at the end of 0079. This class is one of those proposals.

As a feature, it has cargo bays on both sides to store and equip MS, and can operate up to six GM machines. It can also be extended by sliding it forward, and it is said that it was intended to be used as a supply ship in addition to its normal mission. It can also operate fighters such as the Saberfish, but the catapult deck in the forward cargo bay did not have an ejection catapult, so there is a lot of loss when launching fighters, to remedy this an ejection catapult was later added.

A small shuttle mounted on the bottom of the ship.

The refit from the Salamis-class began in September 0079 at Luna II, and was scheduled to be completed in three months, but due to a series of wartime incidents, such as an attack on the supply fleet carrying materials, it was not completed until February 0080, after the end of the war, and did not participate in Operation Star One. After the refit, it was assigned as a MS operation training ship.

Although the basic concept of adding cargo bays on both sides is the same as that of the Trafalgar-class, which was completed and deployed in the field, the development of this class was aimed at realizing a ship that could operate MS most effectively in a short period of time, and its completion during the war was significant. For this reason, the eight ships scheduled to be refurbished soon after the end of the war were scrapped, and the Federation Forces finished the construction of the class with the completion of two ships that were already 80% complete. As a result, a total of only three ships of this class were built. 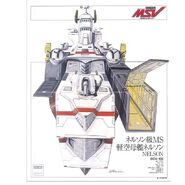