An original, world tournament level Gunpla built by Sei Iori, it is however still incomplete.[1][2][3] The Star Burning Gundam is not based on any existing model; instead it incorporates advantageous elements from various Gundam type Gunplas.[1][3] On the premise that it is used by himself, and in the hopes of Reiji using it someday, Sei designed it as an ultra-multipurpose machine capable of wide variety of battle styles.[1][2]

The Star Burning Gundam is armed with basic Gundam type armaments, consisting of beam rifle, shield, beam sabers and vulcan guns.[1] Additionally, it can fight using only punches and kicks due to its high versatility.[1] Not only can it handle any type of battle, it is also usable in any type of environment, thus no battlefield is too difficult for it.[1] Like Sei’s previous Gunplas, the Star Burning Gundam also has the Radial General Purpose (RG) System, and its clear blue parts will glow orange when the system is activated.[1][2]

Mounted in the head, the pair of machine guns are not very powerful, but boasts rapid fire rates and high accuracy when working with the main camera.[1] They are usually used to intercept incoming projectiles or contain enemy units.[1]

A handheld close combat weapon that emits a beam blade.[1] A beam saber is stored on each side skirt armor, and they have high cutting power.[1]

The beam rifle used by Star Burning Gundam has a foldable design.[1] In the folded state, its firepower is weak but can fire rapidly.[1] With the barrel unfolded, its power greatly increased but at the cost of a lower rate of fire.[1]

A defensive armament that can be mounted on the left forearm. For more effective defense in melee combat, the shield can be separated into two smaller shields and mounted on each forearm.[1]

A revised version of the system used in Sei's previous Gunpla, it drastically improves the Gunpla's performance.[1] When activated, the Star Burning's particle-saturated inner frame glows gold momentarily, while the clear blue parts on the body turn bright orange, similar to the BG-011B Build Burning Gundam's assimilated state.[2] The Star Burning Gundam has strong structure to withstand the particle permeating inside.[1]

This overwhelming destructive punch is executed after the activation of the RG System.[1] When using this attack, the red attachments on the forearms and the yellow protrusions on them slide forward, and energy projections similar to the Star Build Strike Gundam's small "Plavsky Power Gates" are generated from the clear parts on the side of the legs.[2] These projections then surrounds the wrist and change into fire effects when the punch is thrown.[2]

The Star Burning would later be refined into the BG-011B Build Burning Gundam so Reiji could handle it better,[4] and then disguised as a MS-09B Dom and hidden by Sei in the Gunpla Battle World Championship trophy he won with Reiji. 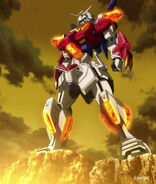 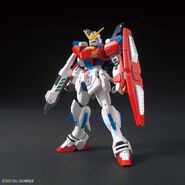 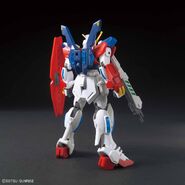 Retrieved from "https://gundam.fandom.com/wiki/SB-011_Star_Burning_Gundam?oldid=491826"
Community content is available under CC-BY-SA unless otherwise noted.