Ryou Roots (リョウ・ルーツ, Ryō Rūtsu?) is a central character in the Gundam Sentinel photo-novel. He is the main pilot of the S Gundam and primary protagonist of the story. Despite this it is in fact the MSA-0011 S Gundam's Artificial Inelligence "ALICE" who is responsible for taking it and using it to defeat most of the storylines antagonist including New Desides ace pilot Brave Cod, leader Tosh Cray, and MS pilot Josh Offshore.

Ryou was a young mobile suit pilot and a member of the Task Force Alpha mobile suit team, which was formed to suppress the New Desides rebellion in U.C. 0088. His father died during the One Year War, and his mother died while working as a scientist on the "ALICE" AI system, causing him to develop a rebellious and brash nature as he grew up. When the Task Force Alpha battleship Pegasus III was sent the powerful S Gundam, it was assigned to Ryou. Because of this, a rivalry forms with fellow Task Force pilot Chung Yung. Through interaction with the S Gundam's experimental Battle A.I., ALICE, Ryou becomes less naïve and develops a sense of trust with the machine. ALICE holds some level of affection for Ryou as parts of his mother's influence were absorbed into the system when his mother died protecting it. Ryou's influence also contributes to the growth and development of ALICE. 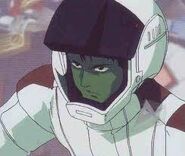 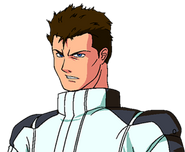 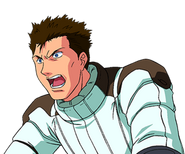 Retrieved from "https://gundam.fandom.com/wiki/Ryou_Roots?oldid=458276"
Community content is available under CC-BY-SA unless otherwise noted.