Rusty Mackenzie is a character that appears in Mobile Suit Gundam SEED.

Not much is revealed about him other than the fact that he thinks more like Athrun and Nicol Amalfi; meaning he questions whether what they are doing the right thing, however, it's also said that his nature is more like that of Dearka and Yzak, hence why he is also described as the "glue" that held the team together in the novelization of Gundam SEED - he is able to relate to all of the members. In the novelization, he does tease Nicol a little bit, and, in the first manga volume by DelRey, he did express views that he thought that Naturals were a bit foolish.

Rusty was one of the elite ZAFT pilots known as "Red Coats", and he ranked 5th at the ZAFT academy upon graduation. He was part of the Le Creuset Team during their attack on Heliopolis. Rusty was going to steal the GAT-X105 Strike Gundam, but was killed by an EA soldier named Hamana before he could enter the cockpit; Athrun Zala avenged his death by killing Hamana.[1]

Photo of the entire Le Creuset team at graduation. 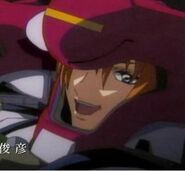 Rusty is killed from a shot to the head (False Peace, Original)