Shahryar is a gentleman who is gentle towards women with elegant appearances. His feelings towards Gunpla are strong, and all of it is expressed in one word, "love".

Shahryar is a member of the Simurgh force—which is ranked third overall in GBN.

Taking a liking to Riku and his friends, Shahry suggested they join his force Love of Gunpla, but was turned down.[1]

While Tigerwolf and Shahryar often argue with one another, they will put aside their differences and work together when fighting the Mass-Divers.

His brother. After Patrick lost the ability to walk due to a flying accident, Ruck introduced him to GBN, a place where he could revive his love for the skies [2][3]. 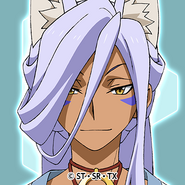 Flashback of Patrick and Ruck Arge in "Seltsam's Deadline"