After winning the Gundam Leopard from the woman he loved, he takes off to start a career as a Vulture, quickly earning himself a reputation as a professional pilot and a ladies man. Signing on as a pilot for the Vulture ship Freeden under the command of Jamil Neate, he takes part in a mission to raid the Alternative Company and rescue a girl named Tiffa Adill from them. Having completed his contract he left only to return along with fellow Gundam Pilot Witz Sou to defend the Freeden from Shagia and Olba Frost.

Joining as a member of the Freeden's crew while Jamil Neate recovers from his wounds suffered from saving Garrod Ran, Roybea defends the ship from a joint attack by Ennil El and Zakott Dattonel. While fighting off the mobile suits under Ennil's command, he is attacked by the Frost brothers and Daughtress HM "Fire Wallaby" mobile suits that set fire to the forest around him. Garrod Ran comes to his rescue with the Gundam X, saving both him and the Freeden from destruction.

Roybea remains with the Freeden till it reaches the People's Republic of Estard when he disproves of taking part in such a conflict as the war going on between the New United Nations Earth and the nations of South Asia. Leaving the Freeden he takes refuge in a small town where he met Yurina Sonohara, developing a relationship with her. Learning that she was a member of a resistance movement against the New UNE he declines to join them, even after being held at gun point by the groups leader Tessa Tain. When Yurina's house is attacked by New UNE soldiers, she is mortally wounded and dies in his arms. Keeping his promise to her, Roybea returns to the Freeden in time to defend it against the Gable, heavily damaging the Gundam Leopard in the process.

Kid Salsamille repairs and remodels the Gundam Leopard with a new set of weaponry, creating the Gundam Leopard Destroy. Roybea pilots his remodeled Gundam till the end of the 8th Space War, leaving with fellow crew member and mobile suit pilot Ennil El after the war. 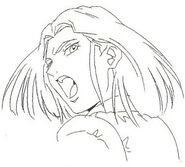 Add a photo to this gallery
Retrieved from "https://gundam.fandom.com/wiki/Roybea_Loy?oldid=453285"
Community content is available under CC-BY-SA unless otherwise noted.