Roux Louka (ルー・ルカ, Roux Louka?) is a character from Mobile Suit Gundam ZZ and is the pilot of the MSZ-006 Zeta Gundam during the first Neo Zeon movement.

Roux is often confident in her own abilities as a pilot and a woman, and is not afraid to use her charm to get her out of some situations or just to get under someone's skin at times, teasing them. These tactics were most notably used on Glemy Toto, who she managed to fool into helping her and survive several attacks that put her life on the line, though this later led to an obsession on Glemy's end. Her patronizing attitude also causes problems between her and her squad-mates, often leading to arguments, especially with Elle and Beecha. She considers them as nothing more then childish kids at first, but forms a strong bond with all of them over the course of the series.

One of her most notable abilities is flirtation and acting, often feigning feelings to enemies and strangers to get what she desires. She also has a relatively high skill level as an MS pilot, and she not only chose the Zeta Gundam, which usually only Kamille Bidan and Judau could pilot, as her machine, but she can also operate the ZZ Gundam.

An A.E.U.G. recruit serving on the Argama after joining up with on Shangri-La to deliver the Core Fighter, as well as helping Judau's group deal with the junk dealers, Zeon, and Yazan. Roux Louka becomes the pilot of Zeta Gundam when Judau Ashta changes over to the MSZ-010 ΖΖ Gundam. A regular soldier and older than Judau and his counterparts, her patronizing attitude towards them initially causes friction, but eventually an unfaltering bond of trust forms between them. However, she still gets into many arguments with fellow pilot Elle Vianno during the course of the series, possibly due to the fact that both women have a romantic interest on Judau. Despite mixed feelings between the enemy pilot Glemy Toto and herself, Roux kills him in their final confrontation by incinerating him with Zeta's beam rifle. After the war, she joins the Jupiter Fleet along with Judau, and seems to begin a relationship with him. 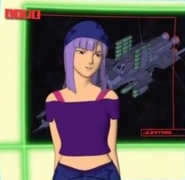