Minoru Suzuki: She married Minoru for a bet, during the battle against Jupiter Empire in Crossbone Gundam: Steel 7. In fact, in order to encourage his companions, she said that she would marry who would have survived in that battle, and Minoru, with the only exception of Tobia, was the only survivor. 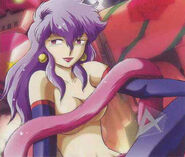 Retrieved from "https://gundam.fandom.com/wiki/Rosemary_Raspberry?oldid=445187"
Community content is available under CC-BY-SA unless otherwise noted.